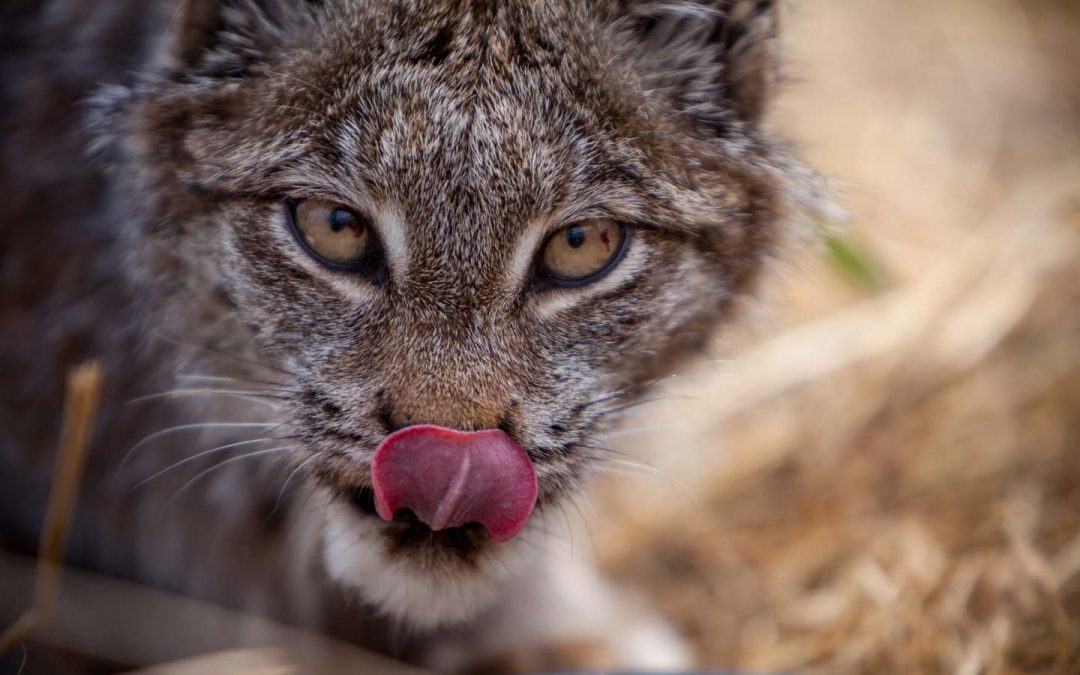 Take a look at this lynx. Does something look off to you?

Those red splotches in her eyes are blood. A car hit her outside of Dawson City in mid-May, 2018. The driver got her to a local vet, who gave her a few stitches to repair a laceration in her leg. But her journey wasn’t over – she needed a place to lay low and recover.

A day later she arrived at the Yukon Wildlife Preserve. She was suffering a concussion, disoriented, parasite ridden and weak. “Her feces had so many worms in it, it was crawling away.” said Dr. Maria Hallock, the Preserve’s Veterinarian. She started treating the parasites and weakness by feeding quail laced with medicine.

With two weeks of top-quality food and medication, the lynx gained almost 1 kg. That brought her up to around 8.4kg or 18.5lbs. Dr. Hallock and her team immobilzied the lynx to do one final checkup. They removed the stitches, vaccinated her, and gave her the ‘all clear’.

Conservation Officer Services picked her up a couple days later. They released her back on home turf, healthy and ready to go! 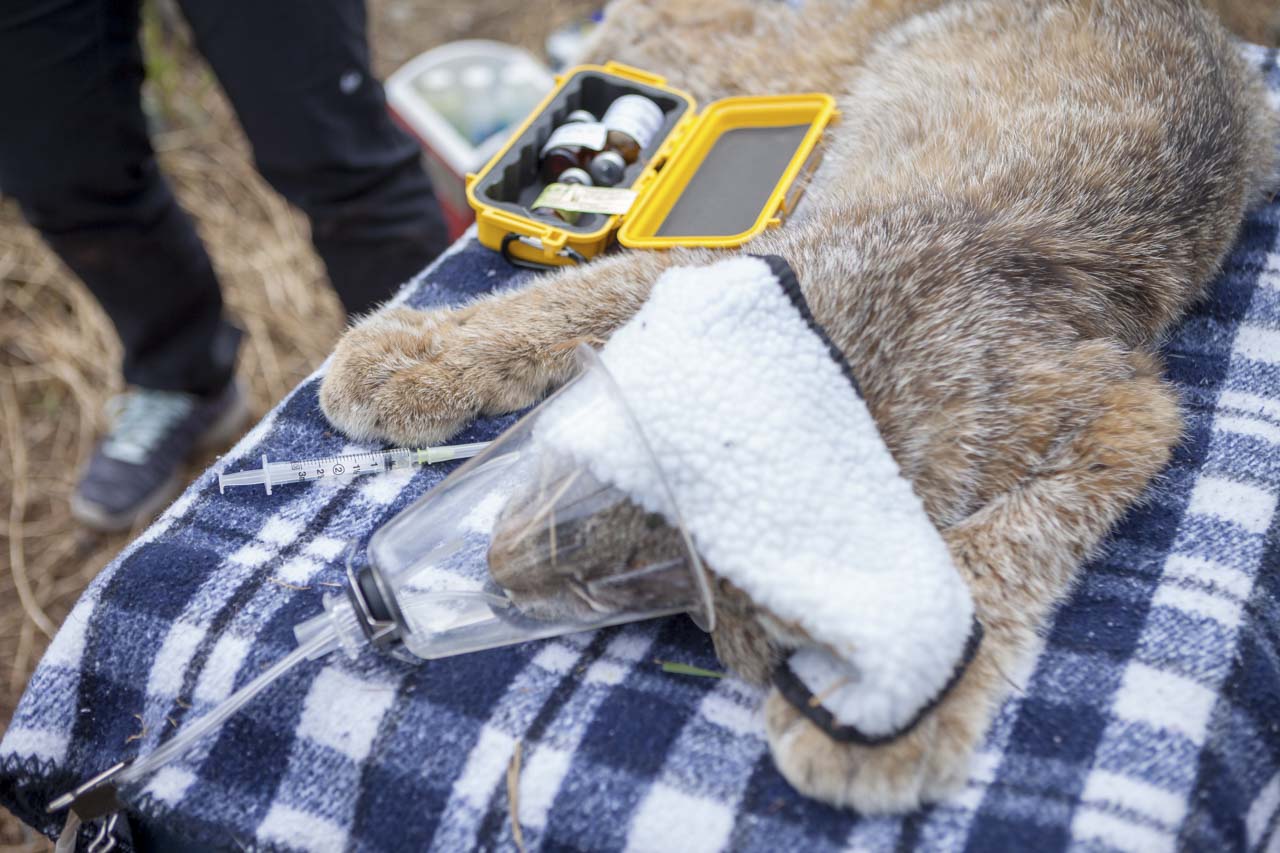 Dr. Maria Hallock sedates the lynx to perform a checkup and provide de-wormer and antibiotics. 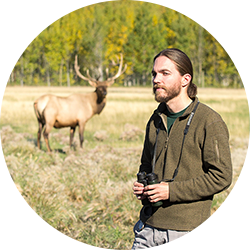 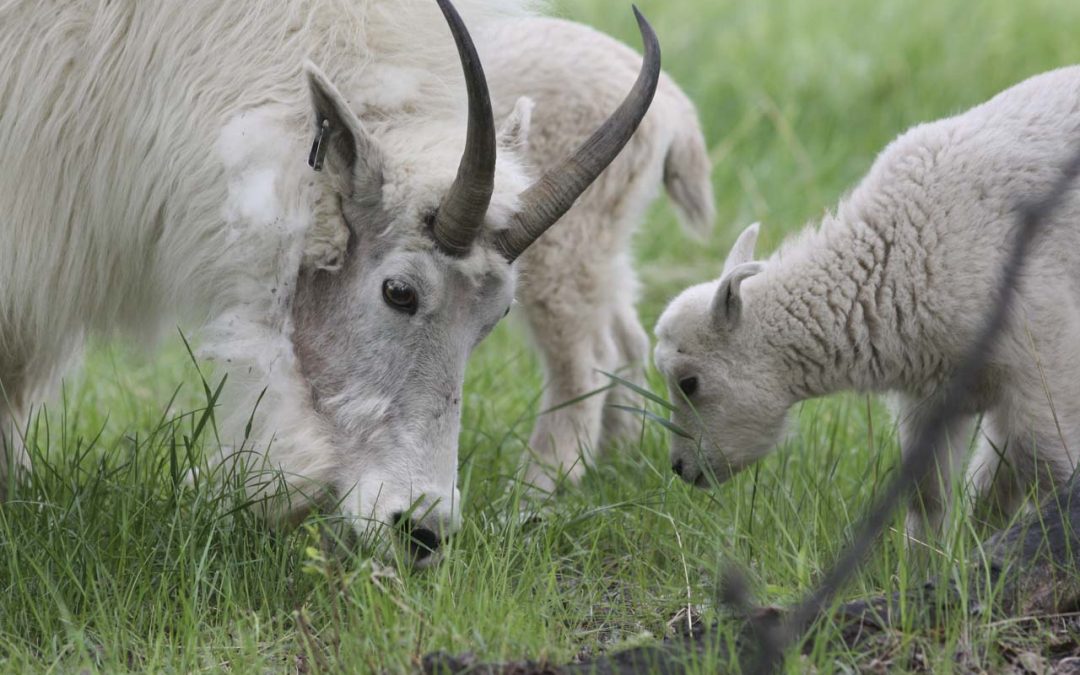 Phenology of Molt in Mountain Goats

Phenology of Molt in Mountain Goats

This original Yukon Wildlife Preserve blog article was written while the research was still in progress in 2018. Several articles have come out since then, with more insight on the outcomes of this research project:

All mammals shed but some shed more hair and more slowly than others. Mountain goats are one such mammal. Remarkably, we know very little about their molt or about the molt of most mammals and birds. Knowing how our warming climate might affect cold-adapted animals like mountain goats or muskoxen may help inform conservation planning and management as well as husbandry for captive populations. 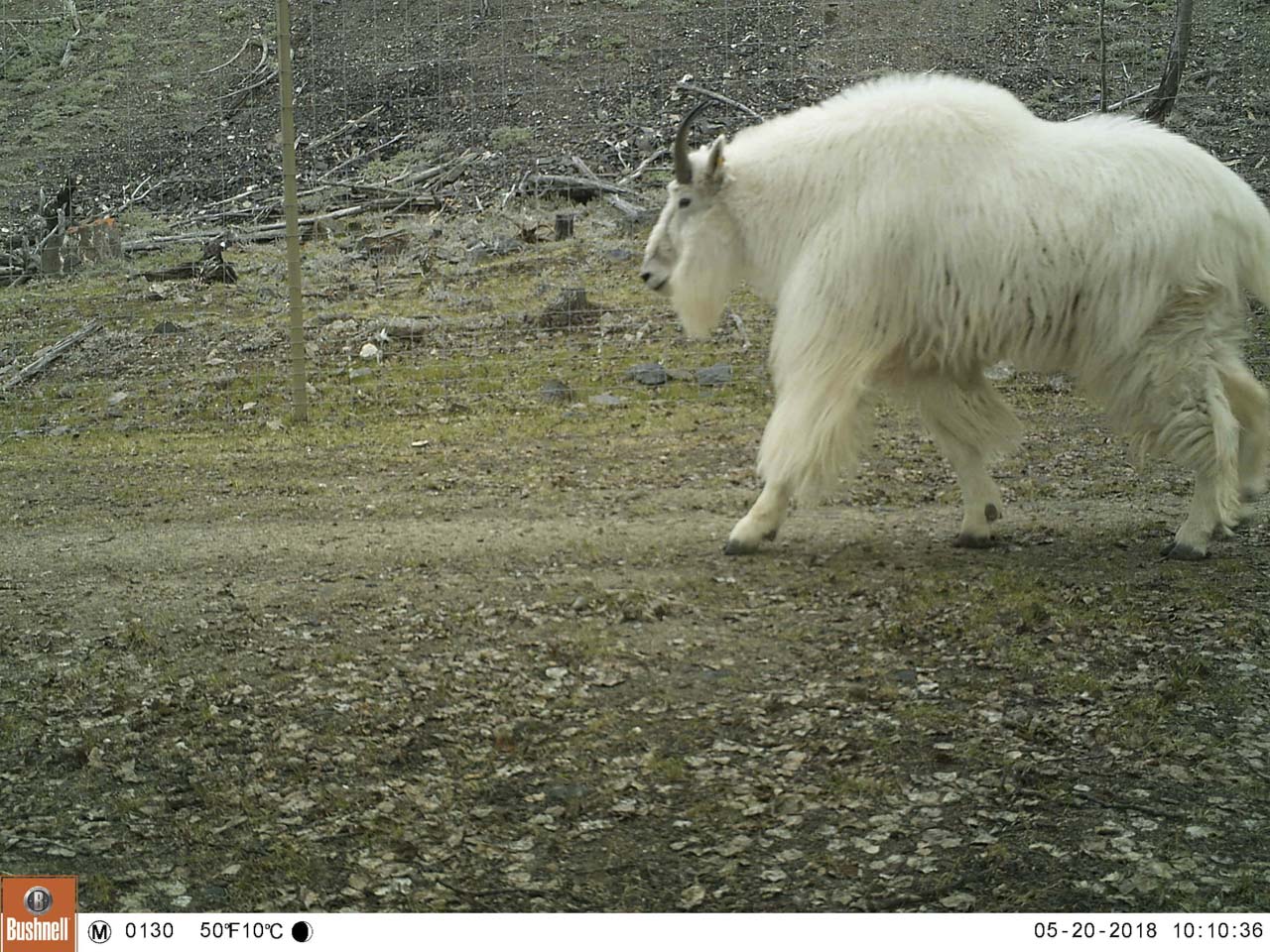 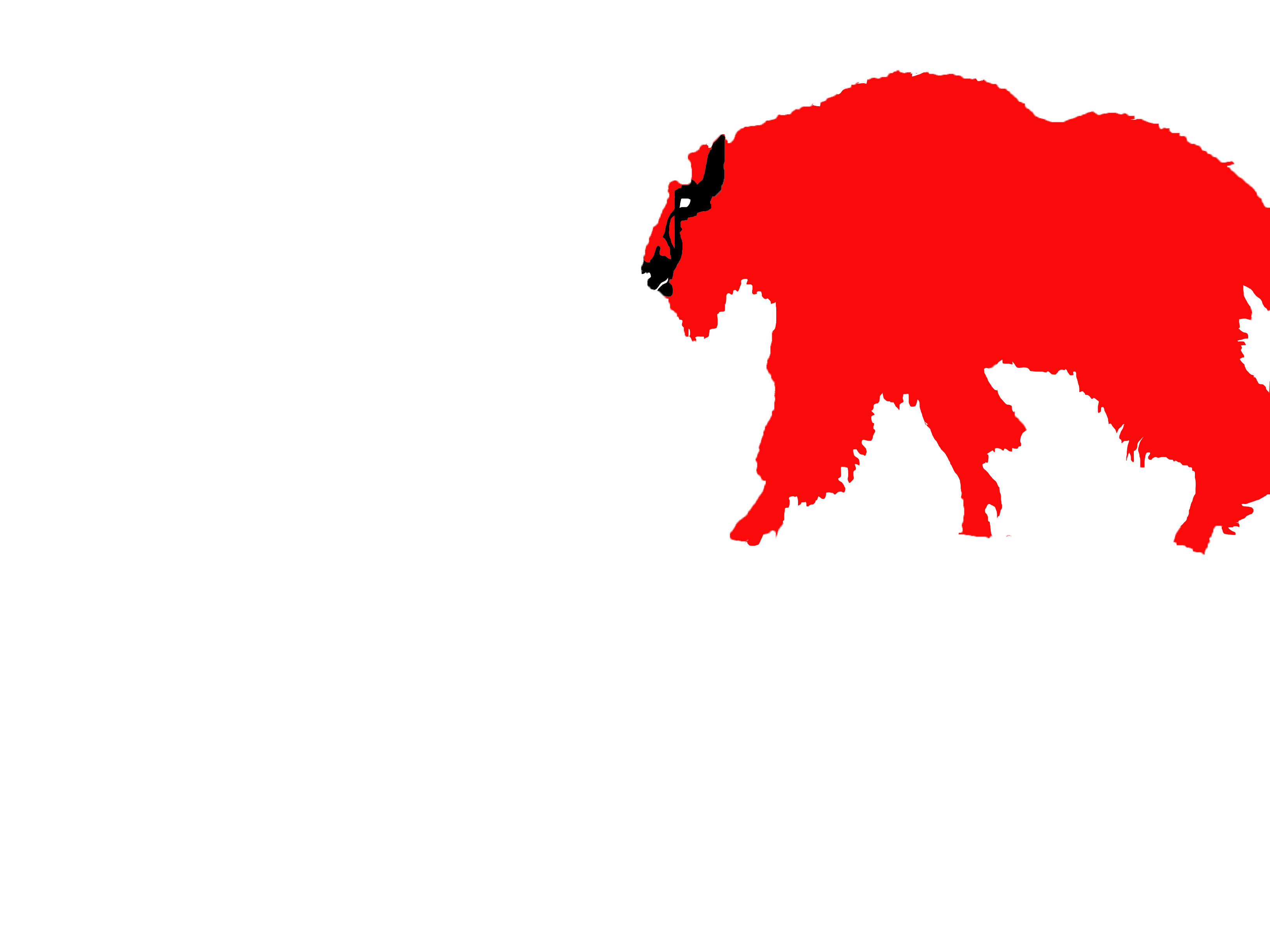 Slide across to see how analysis of trail camera images reveals molt progression. Remote camera images of the 4-year old billy at the Preserve. Rendered show shed areas in black and unshed area in red. Post-processing in Photoshop reveals he was 1.8% shed on May 20th. Images: Katarzina Nowak.

In the middle of May, Preserve staff helped set up four remote cameras. Since then, the cameras have captured thousands of mountain goat photos1The Yukon Wildlife Preserve Research Committee evaluates proposals. Find out more under Learn > Research.

Molt first became apparent in late May and early June. As of June 20th, a 4-year-old billy, and a yearling have shed most (the billy) or all (the yearling) of their winter coats. Close behind them, is 10-year-old billy, Geronimo. The last to molt are the nannies. And we predict the two nannies with this year’s twins will shed last. So far, this follows the molt chronology we expected. 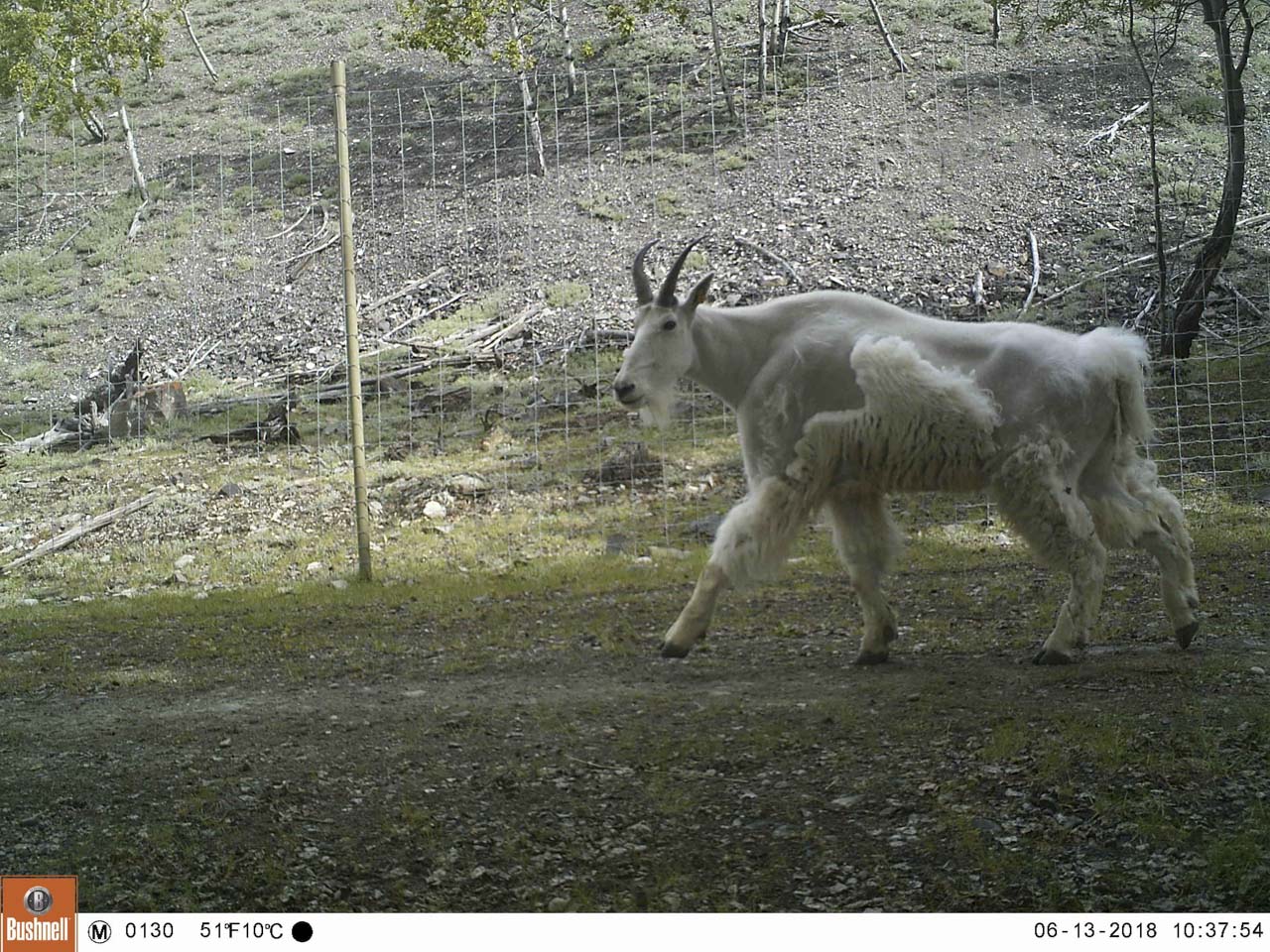 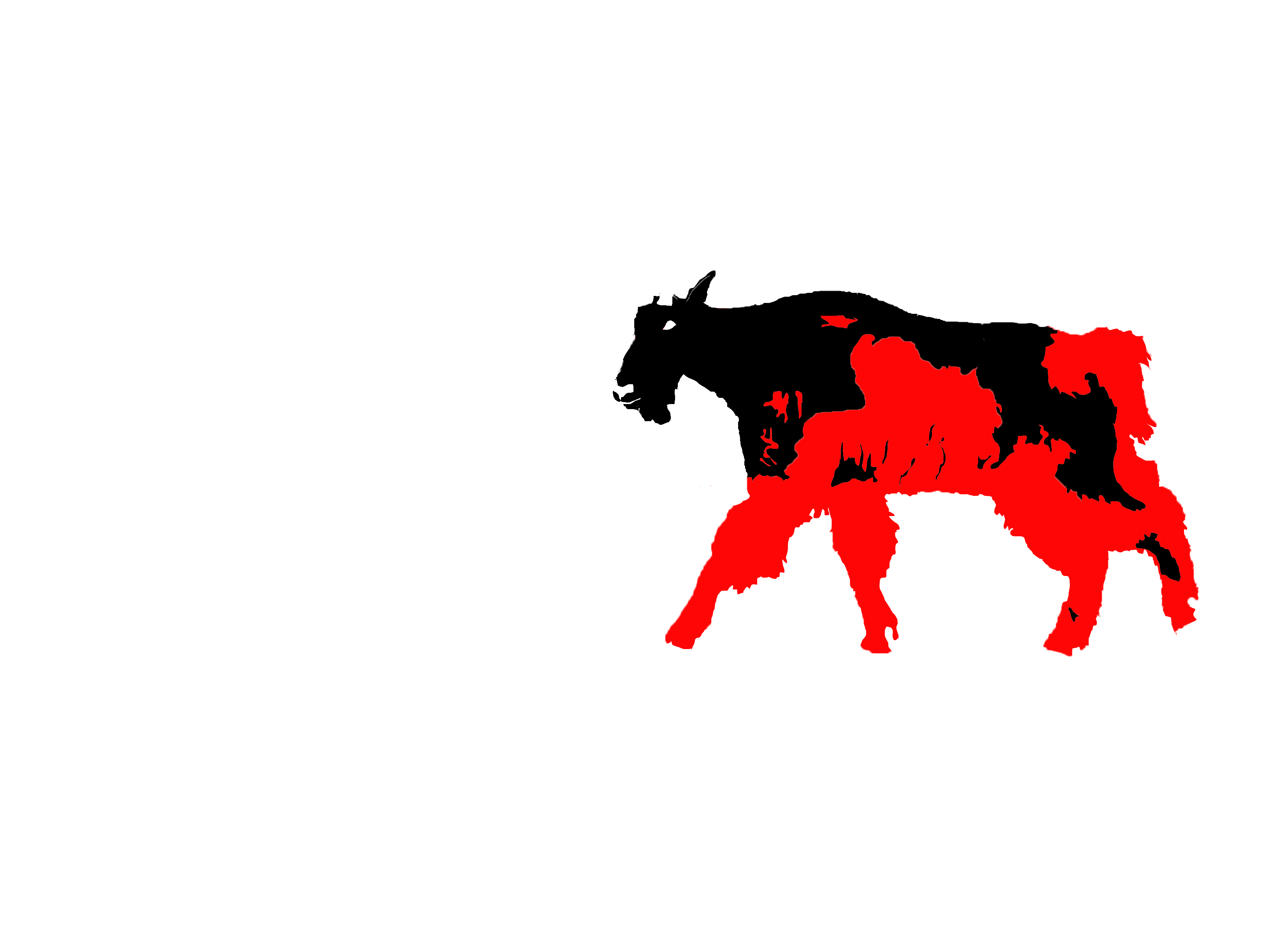 Slide across to see how analysis of trail camera images reveals molt progression. Remote camera images of the 4-year old billy at the Preserve. Rendered show shed areas in black and unshed area in red. Post-processing in Photoshop reveals he was 41.6% on June 13th. Images: Katarzina Nowak.
The Preserve has also allowed me to observe how mountain goats cope with heat. I have watched the goats take frequent dust baths and rub their coats on trees, branches, and feeding stations. The nannies especially have sought – and competed for – shade and pits in the dirt.

We are also remote camera trapping wild goats in several locations in the southern Yukon. And we are amassing photographs from members of the public or “citizen scientists” from across the entire mountain goat range. We expect to learn more about how thermal change is affecting molt. For example, we hope to see if nannies, especially those with kids, face a disproportionate risk of heat stress if they do not molt earlier or faster, or thermoregulate behaviourally.

…animals acclimating to warming in the wild will continue to confront challenges like busy roads and other human pressures.

My recent observations near Montana Mountain in Carcross/Tagish First Nation territory suggest that mountain goats are descending steep slopes to use the Windy Arm of Tagish Lake. To do this, they must cross the Klondike Highway and they opt to do this at night. We will be investigating the drivers of this lake-use over the coming months; to understand if it is for drinking, cooling off, or for minerals. Water pools or artificial shade may prove to be good mitigation options in captive facilities. But animals acclimating to warming in the wild will continue to confront challenges like busy roads and other human pressures.

If you have photographs of mountain goats that you are willing to share with the project for the purpose of analyzing shed patterns, please submit them by e-mail to mountaingoatmoltproject@gmail.com or one of our citizen science portals: CitSci.org web portal or iNaturalist. Thank you for your help! 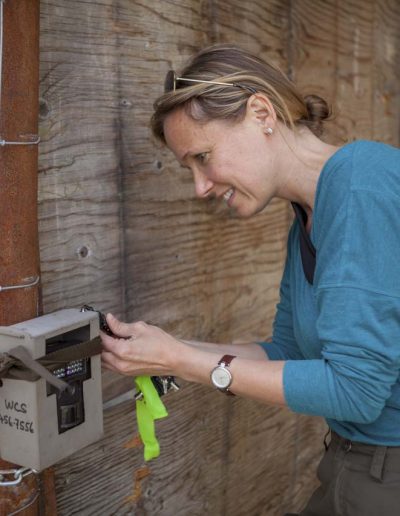 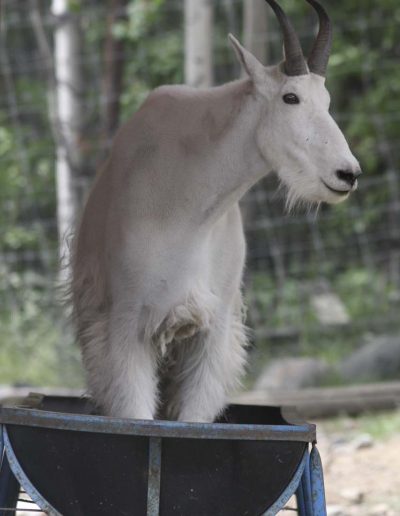 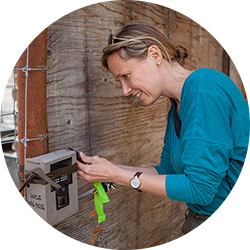 Dr. Katarzyna Nowak is a researcher and fellow at The Safina Center. The Mountain Goat Molt Project relies mainly on participatory science in the form of mountain goat photo contributions from members of the public. It is supported with funds from the Wildlife Conservation Society (WCS) and the Yellowstone to Yukon Conservation Initiative (Y2Y). 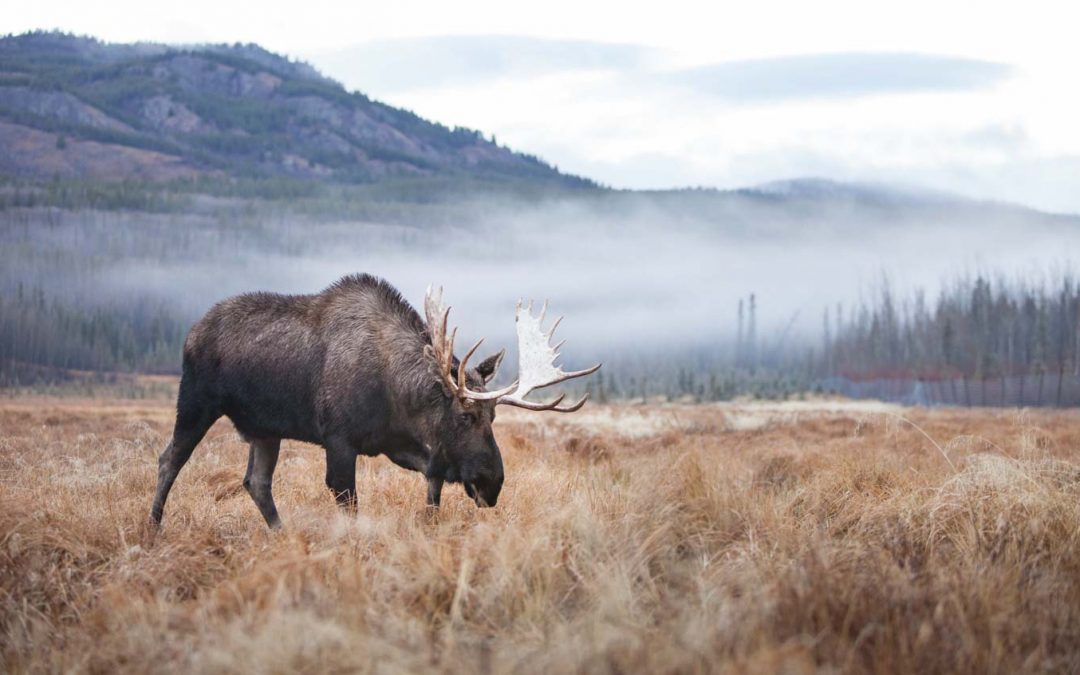 Traditional knowledge, to me, is generation upon generation of events and experiences carefully preserved in language, stories, names and songs. Lifetimes of information passed from grandparent to grandchild largely unchanged in the telling.

Before I was brought in to Whitehorse to attend public school I spend my formative years in and around the Tàän Män (Lake LeBerge), Kwátän Æyá(Fox Lake) and Tàûllä (Little Fox Lake) areas living, hunting and trapping, listening to the stories of how my ancestors travelled the land observing the changes as they came.

That’s how it was. Puttering about along side my grandfather Frankie Jim, while I watched him cutting moose meat he told me this story.

“You know” he said “I was hunting by myself when I came to this big animal with big horns…I never saw that kind of animal before but I needed to get food.”

…but that was the first time I see that; before I only hunted caribou, there was no moose around then.

“I killed it, opened it up and cleaned the insides…” he said “…then I went back to where the people were to let them know so they could come to help me pack the meat out”.

“I told the old men about the animal I killed” he said “when they saw what I got, they told me it was a moose, they knew about it, but that was the first time I see that; before I only hunted caribou, there was no moose around then” he told me. “I was just a young man, “ he said “maybe twelve or thirteen years old”.

My grandfather was from Hutchi, born probably in the second to last, or, the last decade of the 1800’s and he’s passed away some time ago now. I think of him and Gramma Celia often and I share their teachings with my children and my grandchildren.

I tell the stories I heard as a child to underpin the southern tutchone language and history that I pass along within my family hoping they appreciate, as I do, the incredible wealth of knowledge left by our ancestors.

I teach them the names of the moose that now outnumber caribou on the lands where I grew up;

as well as a couple of words for caribou;

The moose and the caribou are used almost in its entirety for food, shelter, clothing, footwear, utensils, tools and toys.

There are three moose resident at the Yukon Wildlife Preserve; using the southern tutchone words for moose, see if you are able to identify each when you next visit their pasture. 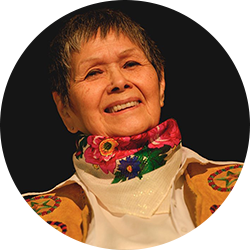 Shirley Adamson is an Elder of the Tagish Nation. She is a member of the Yukon Wildlife Preserve Operating Society Board of Directors and chairs its Animal Care and Use Committee. 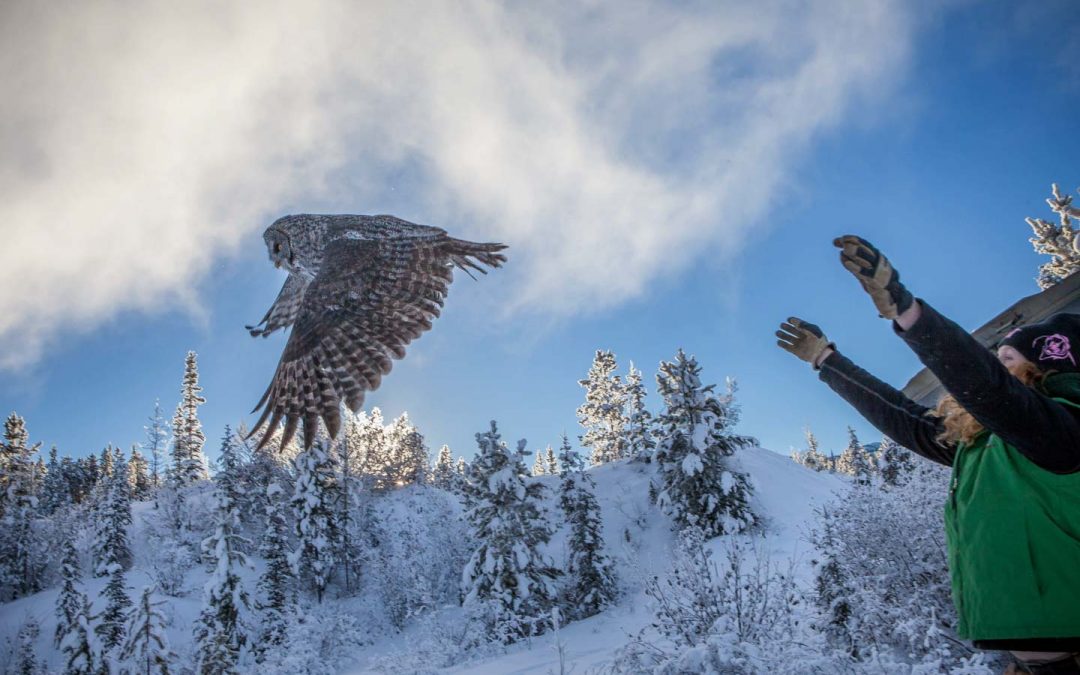 The Gift That Gives Back

The Gift That Gives Back

This limited edition, very special hat (or toque as we Canadians like to call it), was made exclusively in the Yukon. This hat directly supports the diverse community that makes this place and its people so unique!

The Yukon Campfire Hat buffalo plaid pattern was created by Liz Sutton, Treeline Knits of Whitehorse. Liz is an avid knitter and hiker living in the Yukon and creating an array of beautiful hand-knit products. The buffalo plaid design has been her most popular pattern. “I love the truly overwhelming response these hats got, it wasn’t something I expected. I really just started out making the pattern because I wanted a fun hat for camping.” Each of the 5 hats were hand knitted and fashioned by Liz Sutton, especially for the Yukon Wildlife Preserve. 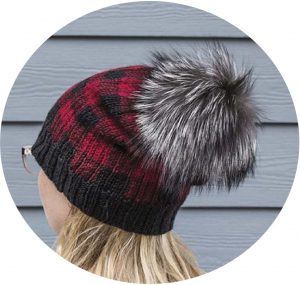 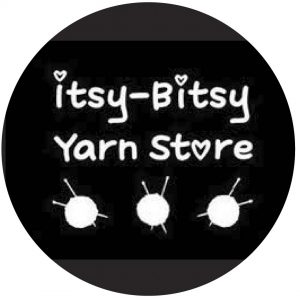 Liz sourced her wool from a little northern yarn shop with a big heart called Itsy Bitsy Yarn Store, located in downtown Whitehorse. Not only was fashion important in creating the hat, but of course function – the hat is made of hand-dyed Merino wool. Merino wool is known to be the less itchy and supreme warmth performance type of wool.

Sustainably Trapped in the Yukon

Liz works with local trappers for the final touch – the fashion focused pom-pom. For these hats, black wolf fur pom-poms were made by Liz. She sourced these from an ethical and sustainable black wolf trapline known as Dulac Trapping – a family run trapline on Cultus Lake located on Łù’àn Män – Kluane Lake. Trapping is an important, self-sustaining lifestyle in the North, integrated in the landscape. Dulac Trapping engages with schools for experiential learning opportunities, teaching kids how to trap, the importance of understanding and respecting the land and animals from which our life is sustained, and wilderness survival. 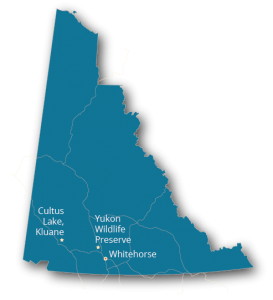 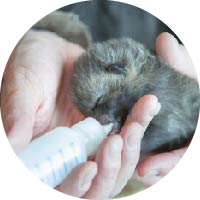 A Community That’s Wild at Heart

The Yukon Wildlife Preserve is a non-profit charitable organization. In the 1970’s Danny Nowlan started accepting and caring for injured and orphaned wildlife at the Yukon Game Farm. Nearly 50 years later the Preserve continues to care for Yukon’s most vulnerable animals. Today we are a living centre of Yukon’s species that connects more than 30,000 visitors to the natural world, each year.

Find out more about what the $100 donation means for the Preserve at donate.yukonwildlife.ca ((This is an example of a footnote!)).

This toque represents so much more than fashion and warmth! It symbolizes the values and lifestyles of this unique territory and the people and animals that call it home. By purchasing this hat you are supporting 5 fold – Liz Sutton of Treeline Knits, Itsy-Bitsy Yarn Store, Dulac Trapping, Yukon Wildlife Preserve – Wildlife Rehabilitation and a community that is wild at heart! 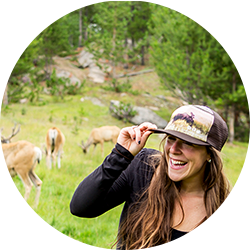