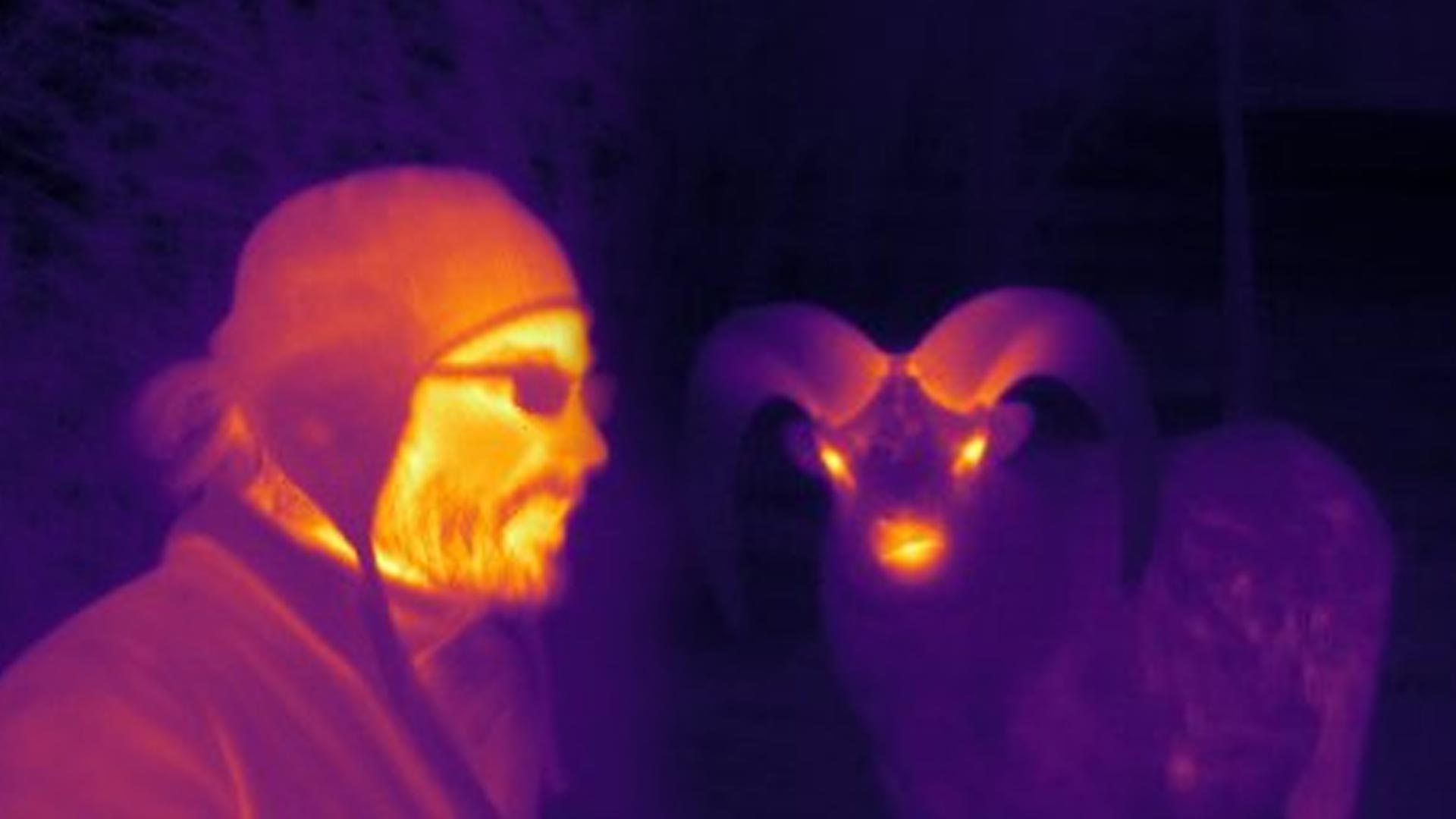 This is Part 1 of a 4 part series by guest author and ecologist, Joshua Robertson on how wildlife at the Yukon Wildlife Presere stays warm (thermoregulates) in the winter.

In the south of the Yukon, winter has long since settled in. Snow has accumulated, ice has formed, and daytime temperatures have regularly fallen below 0°C for many weeks. At most homes, winter coats have found their seasonal places at front doors, and skis and snowshoes now clutter entrance-ways and garages. Winter can be an exciting time of year for outdoor enthusiasts, fireside readers, and West Dawsonites alike (who can set aside their reliance on the George Black ferry for trips to town), and now is a great time to savour it.

Yet, hiding behind this winter enjoyment lies a sneaky and particularly interesting financial change; energy bills (or wood consumption, for those living off-grid) are steadily elevated. Yes, according to estimates made by Yukon Energy, monthly energy costs for the average home have risen by at least $75.00 since September. It may be several hundred dollars more if you use electric heat. Otherwise odds are good that your home heating bill has gone up significantly. These costs are certainly not small and emphasise a long-known and unfortunate reality for northerners; winter can be expensive. But, if you happened to complain about your rising energy costs to a local biologist, you might hear them say that you, human, should not feel so alone; it all depends on how you think about the word “energy”.

Energy is, at its simplest, the capacity to do work.

Throughout the duration of my PhD, I’ve found myself in many conversations about this ever-present and ever-charged word “energy”. To engineers, the term can stir thoughts of turbine velocities and kilowatt hours. To biologists, the topic most often brings up conversations about “ATP” (or, “adenosine triphosphate”), a molecule that is known to power most processes within a living cell. On the surface, both perspectives of what energy is or means might seem entirely different. If you ask an engineer or biologist for a definition of the word, however, you will probably receive the same, beautifully universal definition. Energy is, at its simplest, the capacity to do work. Whether the source is wind or complex proteins stored in a lynx’s breakfast, the potential to accomplish some task (such as twirling the blades of the Haeckel Hill wind-turbines or rebuilding damaged muscle tissue) remains fixed.

Now, with a clear definition of energy in mind, let’s return to that elusive and hypothetical suggestion made by our local biologist; winter has arrived, our energy bill is rising, but as humans, we aren’t alone in this experience. If energy is the capacity to do work, then what work is it that we and other animals require more of during the winter than other seasons? Although there may be a few answers to this  question, I’d argue that the most fitting one is probably the largest contributor to your monthly energy expenses this month: you guessed it, generating heat.

just as keeping warm comes with financial or time costs for humans, it also comes with energetic and nutritional costs for most other animals

For us humans, this typically means gathering wood, purchasing propane, or upping our electricity usage to keep our rooms comfortably warm throughout the short days and long evenings. For most other animals in the area (with a small caveat discussed below), generating heat means eating more and more often, shivering regularly, and hunting more frequently to warm their bodies through the processes of digestion and movement. So, just as keeping warm comes with financial or time costs for humans, it also comes with energetic and nutritional costs for most other animals; we pay in dollars, while the resident coyote pays in mice. An important thing to remember here is that maintaining a relatively constant and elevated body temperature is essential for survival for most animal species (ourselves included). That means that neither we nor they can easily or safely skimp on payments.

As you might expect, however, comparing costs of winter-living between us and our neighbourhood animals (in biology, we call them “sympatric” animals) isn’t so simple. As many readers may know, not all animal species are capable of producing body heat at the expense of food (a trait known as “endothermy”), and for those that are, the costs of doing so can vary quite dramatically. Thankfully, most all animal species that you’re likely to observe during a Yukon winter are indeed endotherms, so we can simplify our discussion by ignoring the other types (called “ectotherms”) from here on. Variability in the costs of keeping warm among species, however, is something we certainly can’t ignore. In fact, in my opinion, it’s in this variability where things truly become interesting. To help you side with me, take a look at the figure below that compiles energy consumption data collected by both Yukon Energy and a horde of poorly paid wildlife biologists. 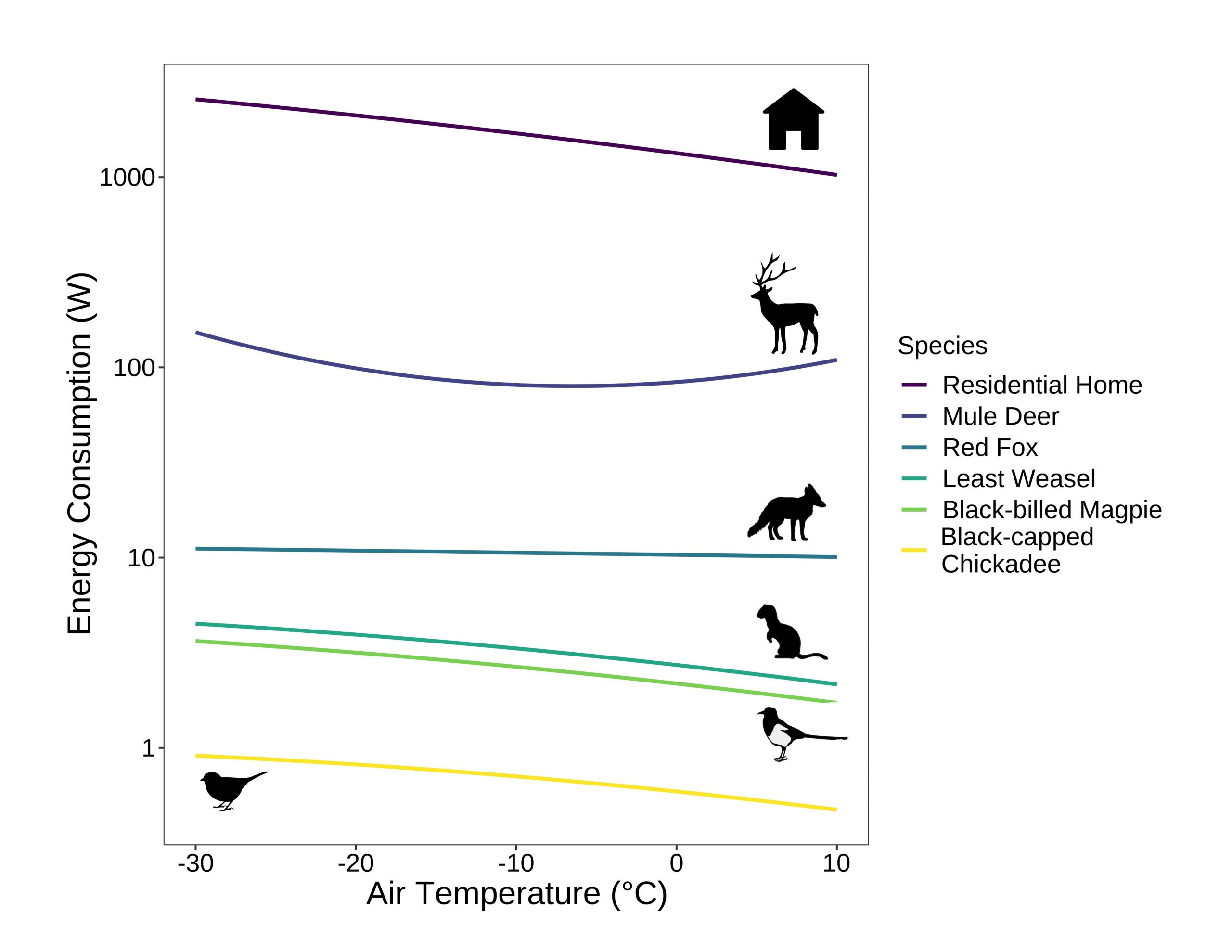 Because energy is surprisingly universal (as we discussed above) we can conveniently measure and display energy consumption for various animal species and a residential household using the same units (here, watts, or “W”: a measure of power). Before attempting to interpret this figure, first ignore the differences in vertical position of each line representing an animal species or household; these average differences in position are mostly explained by the (somewhat boring) differences in size among entities. Instead, take a close look at the overall differences between energy consumption in the cold (the far left) and the warmth (the far right) for each line/animal. These differences provide a fairly reliable measure of the relative costs of keeping warm for each species during cold months –  more commonly referred to as their costs of “thermoregulation”. Next, try considering the slopes of each line. As the inverse of our difference values, these slopes provide a reasonable indication of how efficiently heat is stored by a given species, where steep slopes represent relatively low heat-storage efficiency, and levelled slopes represent relatively high heat-storage efficiency.

Now, what you should have noticed is that for some species (the black-capped chickadee, black-billed magpie, and least weasel) the relative costs of thermoregulation in the cold can be quite high, and the relative heat-storage efficiency can be terribly poor. In chickadees, for example, costs of thermoregulation can reach over 70% of total energy expenditure on a given day, probably owing to their relatively poor ability to capture and preserve heat that is generated by their bodies (indicated by the steep slope of their line). More on chickadees here! 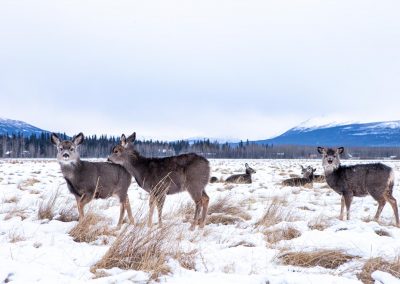 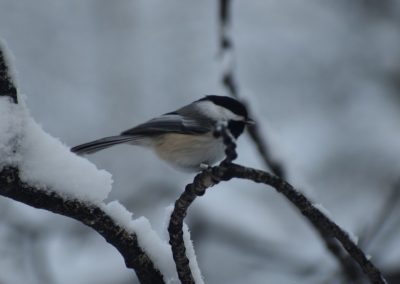 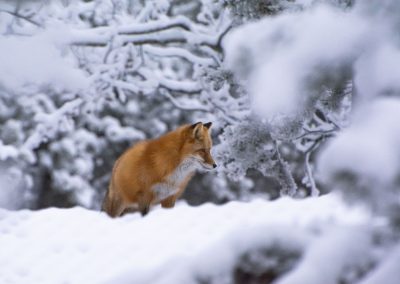 By contrast, for other species (the red fox and mule deer), the relative costs of thermoregulation in the cold can be shockingly low, and heat-storage efficiency shockingly high. The nearly-flat line associated with the red fox, for example, suggests that this species barely spends a mouse-worth of calories keeping warm at temperatures below -20°C, and is probably able to store most heat that is generated by its body. Furthermore, the curved line associated with the mule deer indicates that at temperatures above approximately 5°C, this species actually spends energy on getting rid of heat, not keeping warm, thanks to heat-storage efficiency being almost problematically high! Perhaps most impressively, however, is the average difference in slopes between animals and the residential home. From this difference, it appears that despite advanced insulation and/or double-brick walls, the relative costs of keeping our homes warm actually well-exceed those associated with many other animal species keeping themselves warm. Nevertheless, we should interpret household trends with caution given that use of electrical devices other than space-heaters or baseboard heaters (e.g. lights) may also increase in colder months, therefore further driving up total energy consumption.

At this point, you’re probably asking one of two questions:

These questions are something that Jake Paleczny (Executive Director at the Yukon Wildlife Preserve) and myself had been captivated by for quite some time. So, last winter, he and I equipped ourselves with an infra-red themographic camera and went to seek answers during a fortunately-timed cold snap at the preserve. 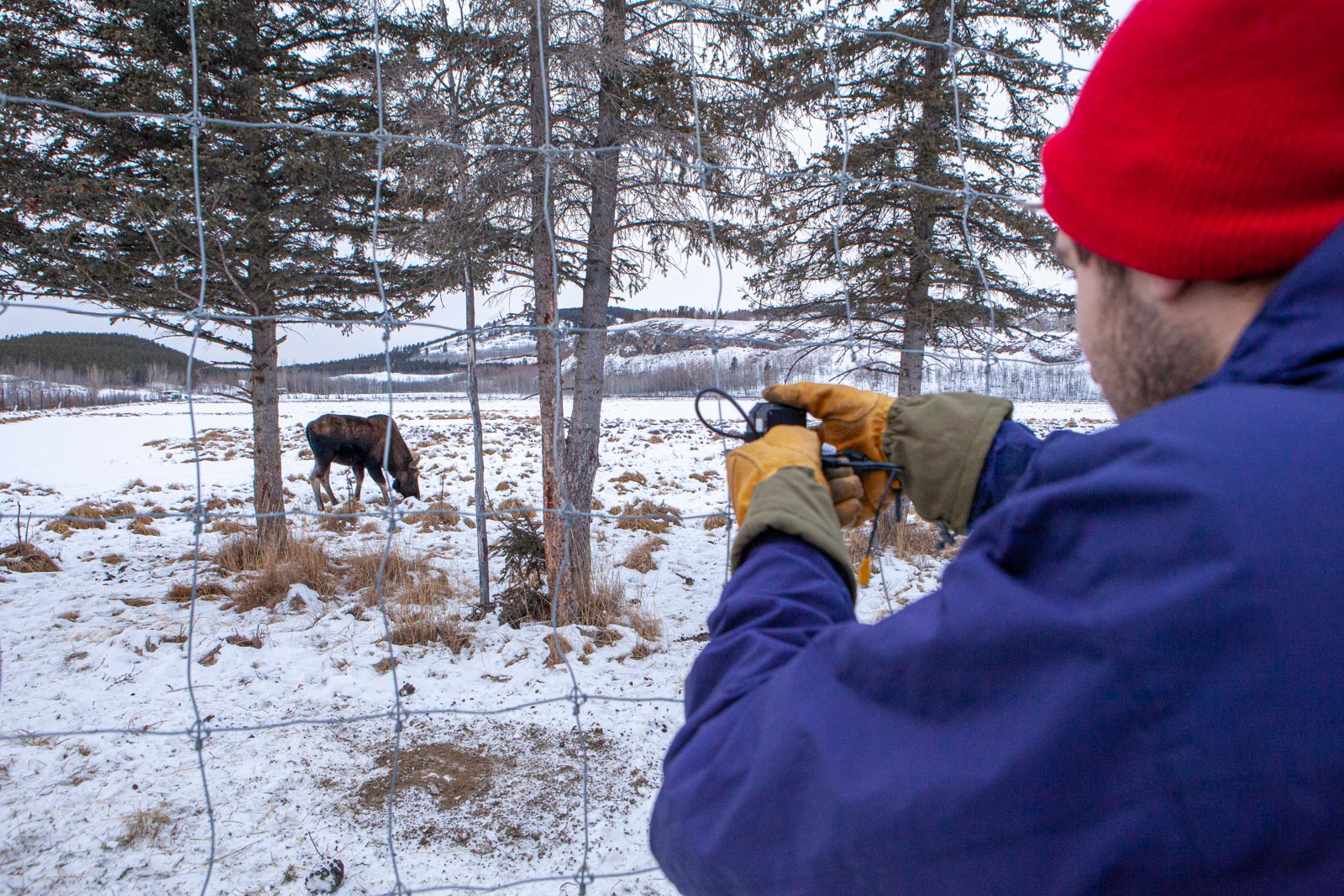 With our camera, we were able to remotely measure and quantify the amount of heat lost to the environment (again, in W) by both ourselves and the animals cared for at the preserve. From there, we were then able to compare relative heat-storage efficiency between different animal species and ourselves, and estimate just how much energy in food (measured by number of MacDonald’s cheeseburgers) we and other species might need to counterbalance energy lost in heat during the cold snap. Results of these estimations, will be detailed in the next post in this series, but for now, I’ll leave you readers with a few telling images (below) and a piece of a cheeseburger. 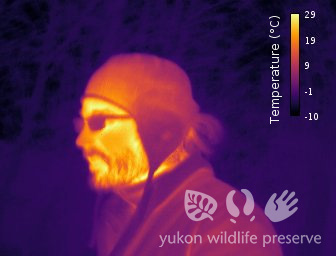 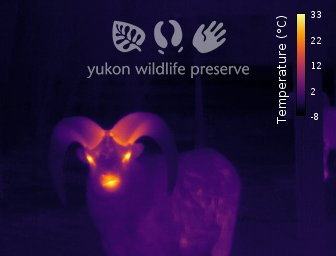 On the left is an infrared thermographic image of Jake that was captured while he was walking near the mule deer enclosure. The colours in this image represent the temperature of an object’s surface; the warmer the object, the brighter the colour (as indicated by the scale bar). To the right is a thermographic image of a thinhorn sheep (commonly known as a Dall sheep). The air temperature at which both images were taken averaged around -12°C – a modest winter day. Bear in mind that Jake is wearing a winter jacket and thermal lining underneath it, while the sheep is wearing its usual attire.

Now, if Jake were to have remained outside at the preserve for 4 hours, the amount of heat lost across his exposed face alone (the remainder of his body excluded) would amount to about a tenth of a cheeseburger. The thinhorn sheep? Well, we’ll have to get to that next time. 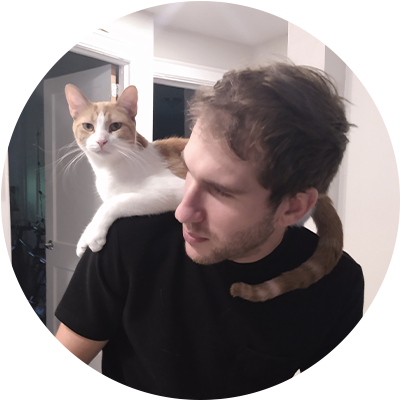 Joshua is a behavioural and physiological ecologist currently living on Cape Breton Island, Nova Scotia. During his PhD at Trent University, Joshua sought to understand how small birds can cope with the high costs of body temperature regulation when challenged with other environmental stressors (such as human and predator exposure). He is currently extending the research to better understand energy management strategies in warm-blood animals.