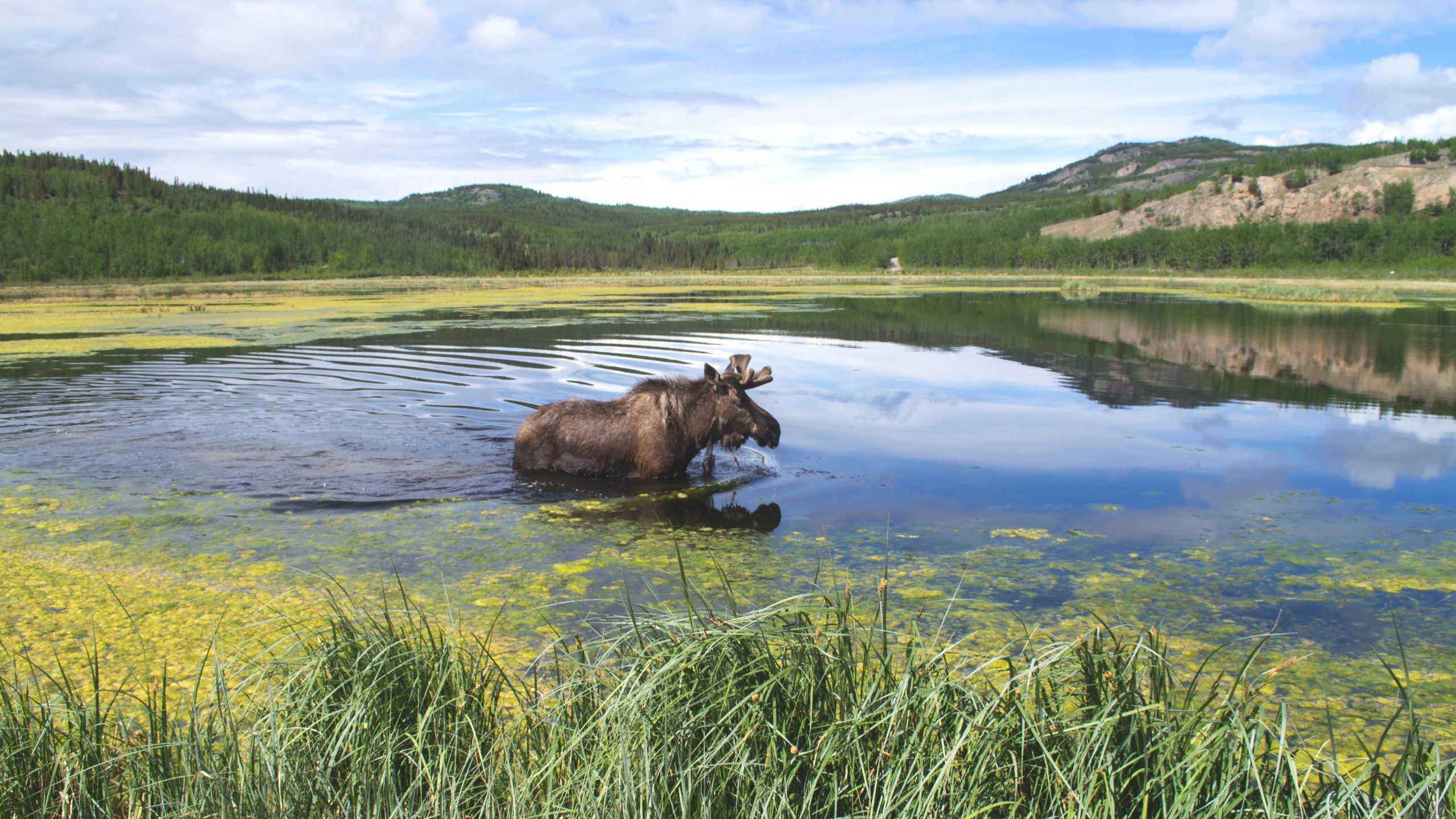 You have most likely heard the phrase “Don’t judge a book by it’s cover”, implying that captivating stories can be hidden behind bland book covers. Similarly, at one time or another many of us have been judged or have judged others based on their outward appearance. Judging others based on their appearance can lead to us underestimating other people’s abilities. Have you ever been underestimated? How did it feel? Due to their funny-looking, long snouts, and gangly, plodding bodies, moose are often underestimated. People tend to view moose as gentle, slow-moving animals, and often don’t associate moose with characteristics such as agile and fierce. Cartoons1Like Bullwinkle the Moose can perpetuate this impression by displaying moose as slow, friendly Canadians. But don’t be deceived by this common misperception. Though moose may look unassuming, they are capable of performing impressive athletic feats in order to find food and avoid predators. 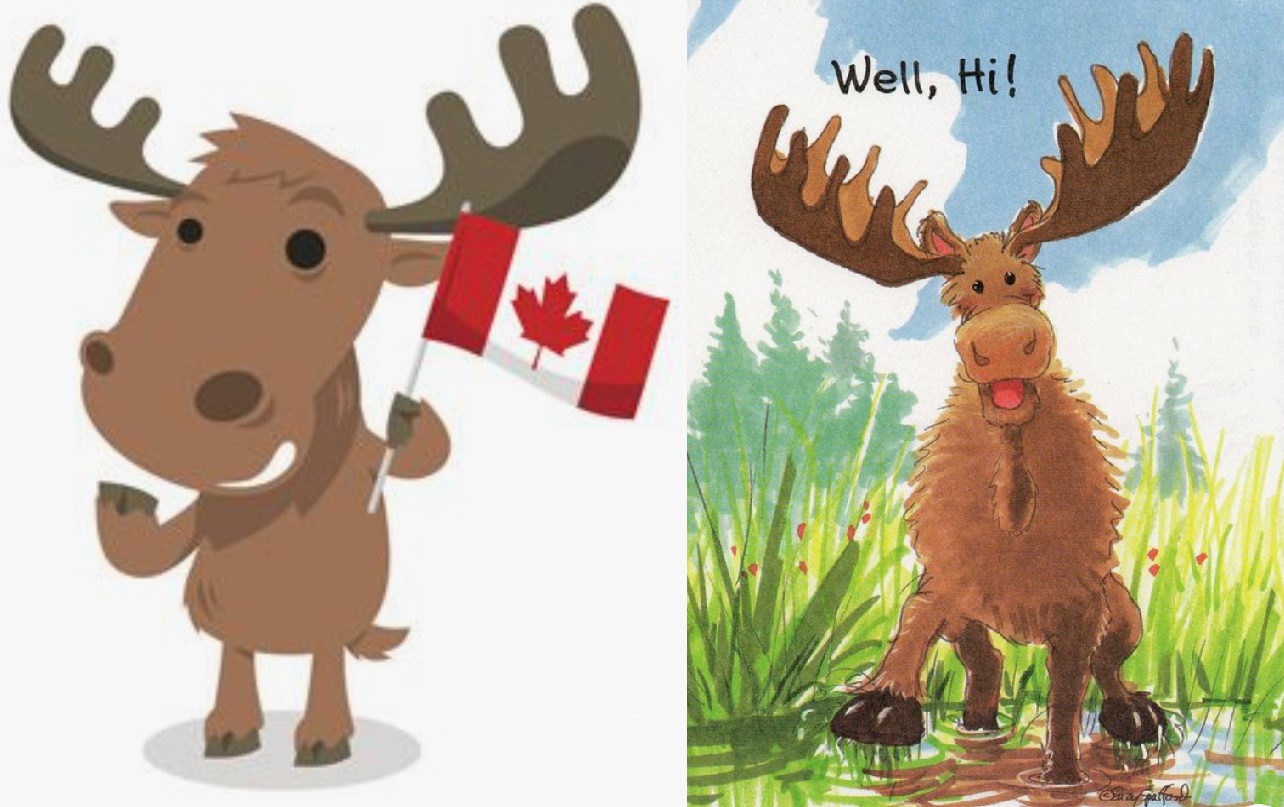 Despite their appearance, moose can easily propel themselves through water in order to find food. While otters, beavers, and other mammals that are known for their swimming ability have lean bodies and webbed feet which allow them to easily glide through the water, moose are heavy-set and have hoofed feet. Despite their size and hooved feet, moose have the advantage of being tall, and their long legs help propel their large bodies through the water. Moose also have hollow hairs, which help them stay buoyant while swimming.2National Park Service With these advantages, moose can swim as fast as 9.5 km per hour. By comparison, most humans only swim at the pace of 3 km per hour. Moose’s ability to swim quickly allows them to travel in search of food while reducing stress on their joints. Water also helps protect moose from predators because it is more difficult for predators to sneak up on them when they are in the water.3Moose Facts 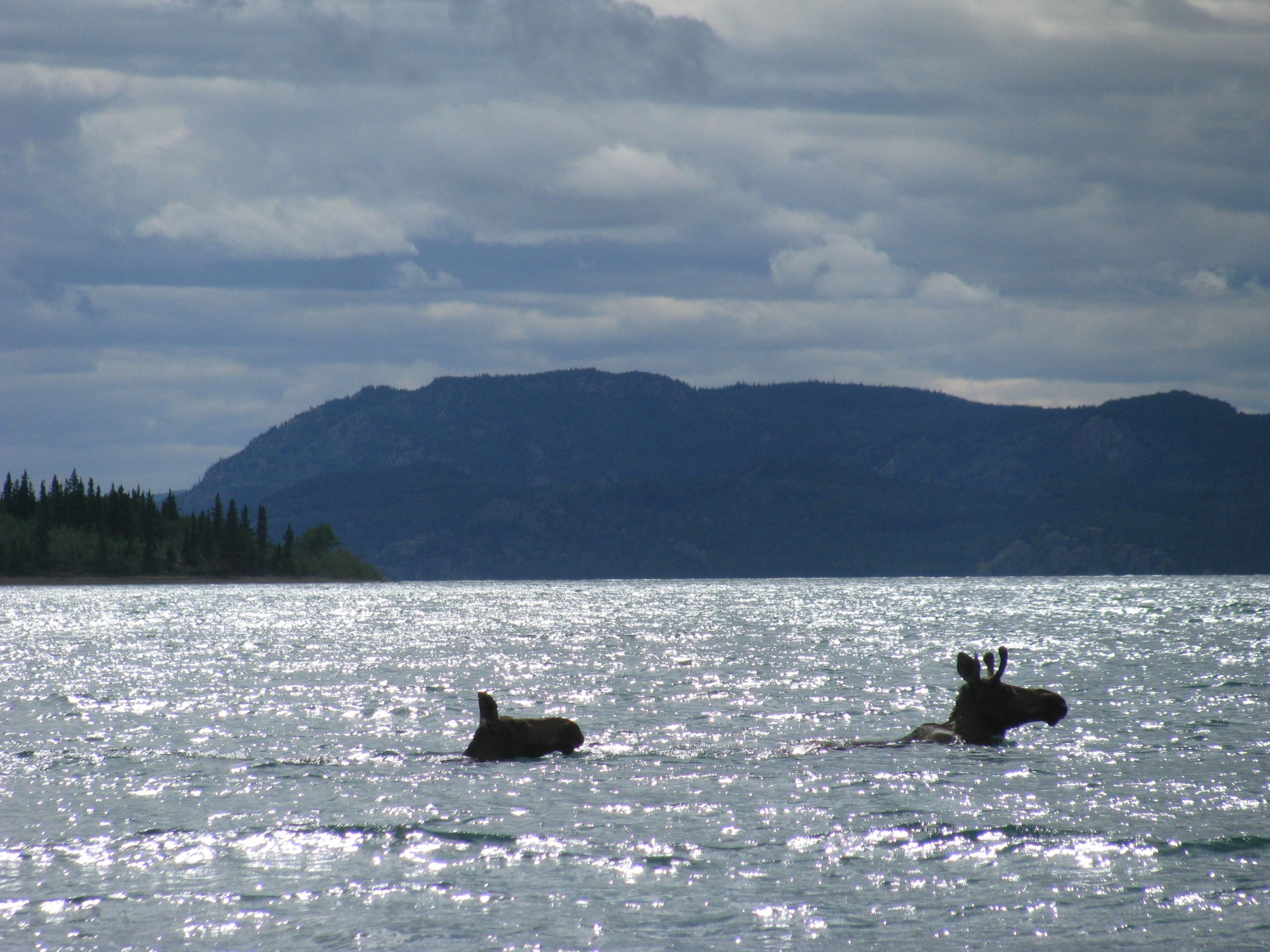 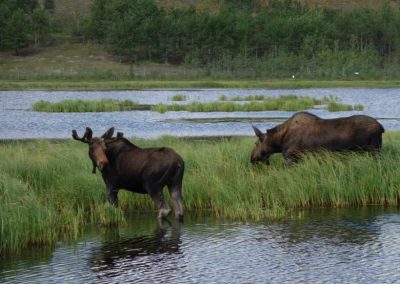 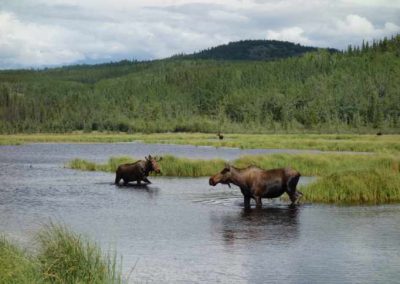 Moose also have adaptations that allow them to dive underwater to eat nutrient rich aquatic plants.4National Geographic To prevent water from rushing up their noses, moose have flaps that close in their nostrils. These flaps allow them to hold their breath underwater for up to 50 seconds5Holding breath Ecology and Management of the North American Moose and help them to dive up to 6 m (20 ft) underneath the water surface!6Hinterland Who’s Who After a winter of sparse food resources, aquatic plants provide essential energy to both pregnant cows (female moose), and to bulls (male moose) as they regrow their antlers. 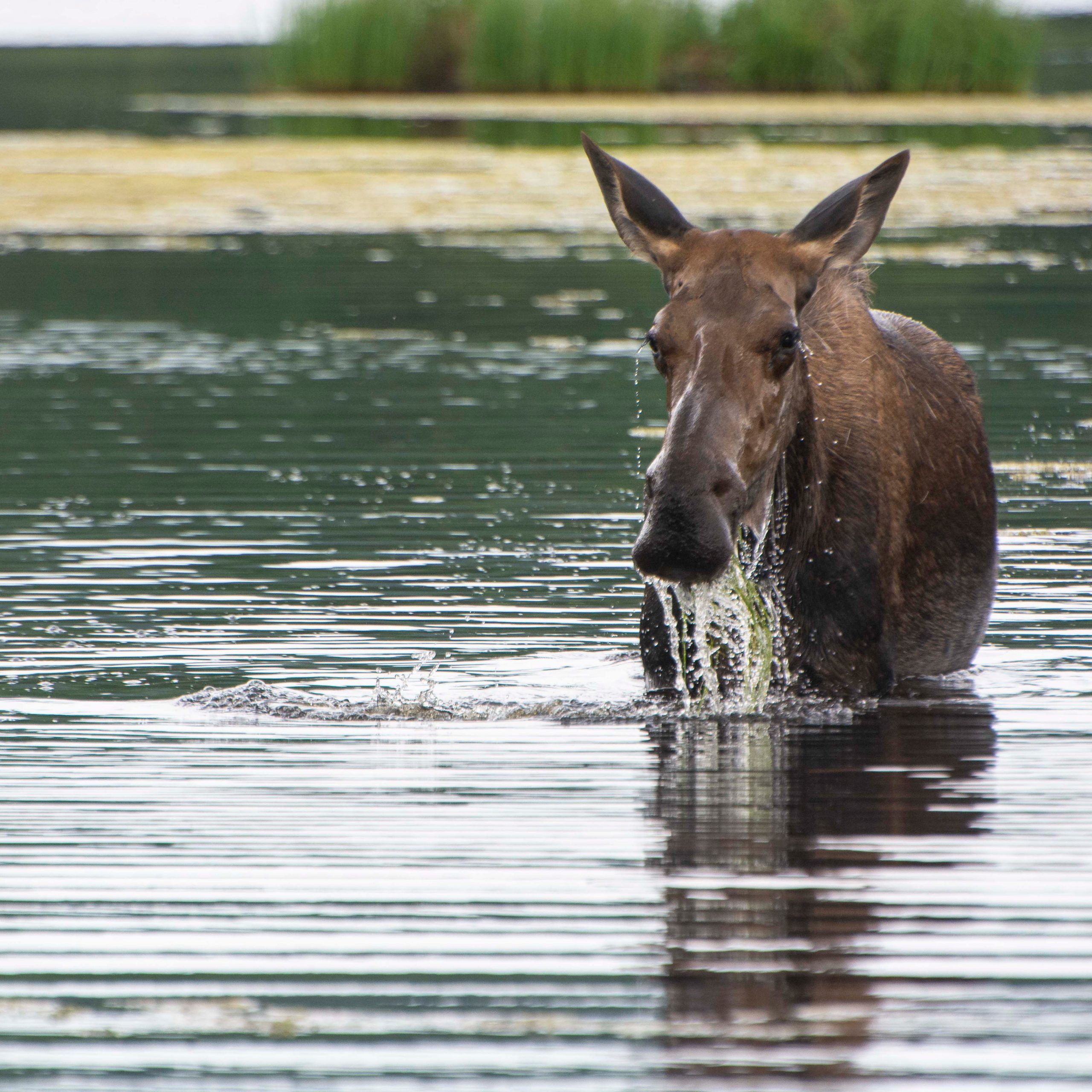 In addition to swimming, moose are also capable of running at high speeds. Being the tallest member of the deer family, a moose can stand around 6 feet tall at the shoulder, which is as tall as some professional basketball players.7National Geographic Even though moose might be too gangly to make great basketball players, their height and long legs allow them to run very fast. A moose calf can outrun the average human after only 5 days of life,8National Geographic while an adult moose can charge at a pace of 56 km per hour, and maintain a pace of 32 km per hour over longer periods. For perspective, during his world record 100 metre dash Usain Bolt ran at an average pace of 44 km per hour. However, moose do not run fast to set world records, their speed provides them protection by enabling them to run away from wolves and other quick-moving predators.

Furthermore, despite the perception of being friendly, moose are actually effective fighters. Though they sometimes use their speed to outrun predators, an experienced and healthy moose is capable of defending itself against wolves by standing its ground and fighting.9Wolves of the Yukon by Bob Hayes Moose will protect their sides by standing next to trees and high shrubs, and then use their powerful legs to stomp or kick attacking wolves, hitting them with their deadly hooves. A powerful strike from a moose’s sharp hooves can result in injury to or even kill a wolf. 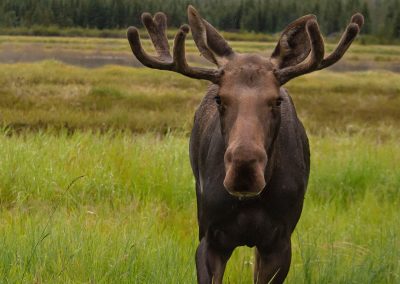 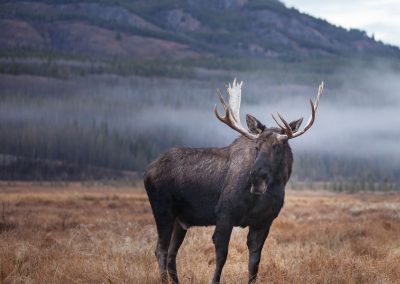 Even young moose are large animals.  The photos show 2 moose bulls; on the left a young 1 year old and on the right a more mature bull of many years of age.

So, are moose really the plodding, polite animals that cartoons depict them as? Have you ever underestimated moose based on their goofy-looking appearance? As we have seen, instead of being slow, and plodding, moose are impressive athletes. Moose are capable of swimming through and under water, which allows them to more easily travel in search of food and access the nutrients they need during pregnancy and to grow antlers. Moose are also capable of running at high speeds and of fighting off other animals, which helps them survive attacks from wolves and other predators. Each of these athletic capabilities are important survival mechanisms that help moose thrive in the wild. 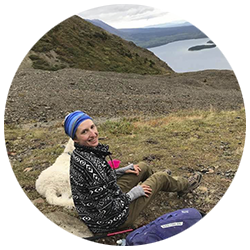 Tasha is a self-proclaimed animal enthusiast and adventurer. Originally from British Columbia, she enjoys skiing, hiking, and all things outdoors. She is happiest when she is climbing a mountain with her pup. Having recently moved up north, she has enjoyed learning about Yukon’s wildlife and landscape and is excited to share the new knowledge she has learned with visitors to the wildlife preserve