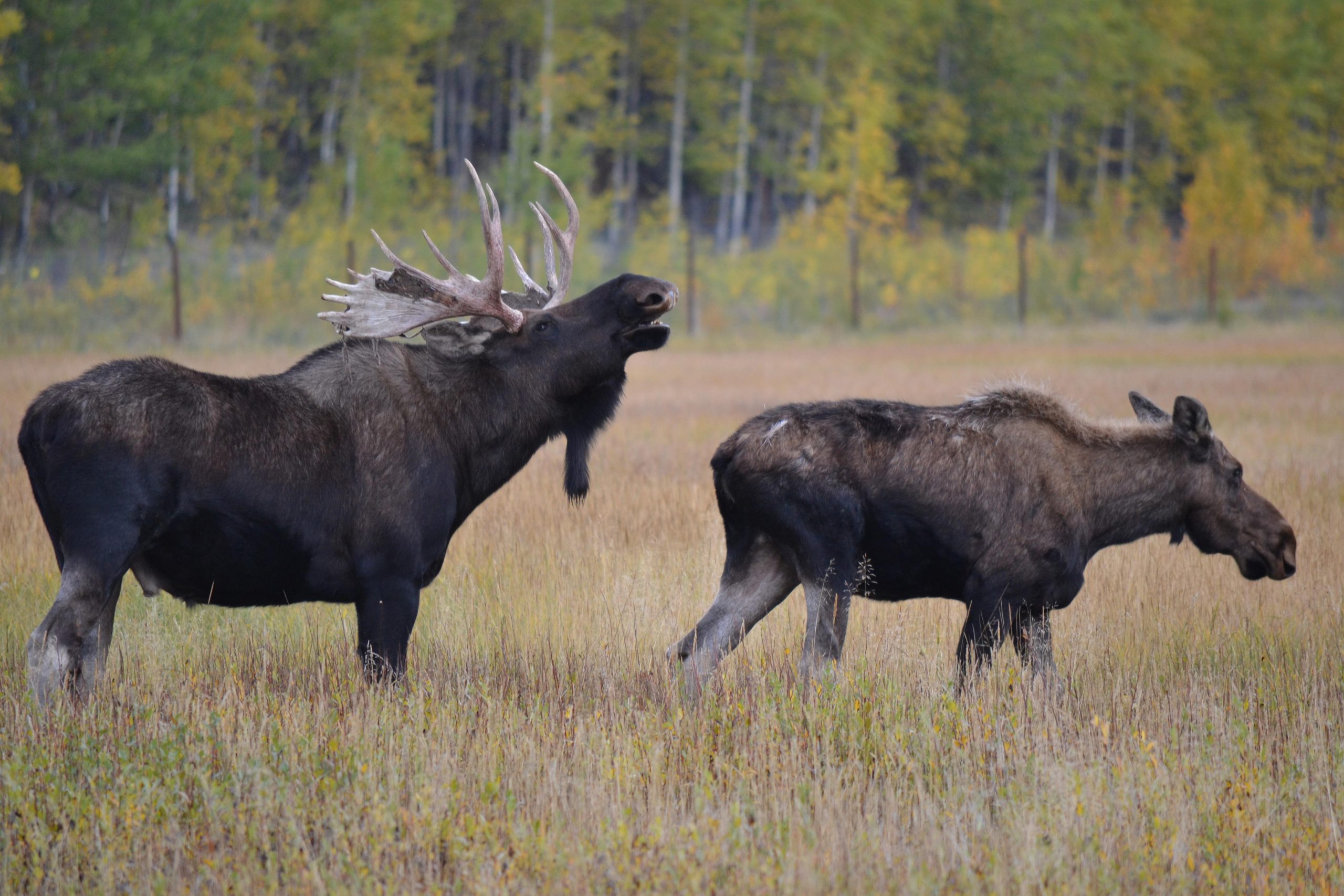 10 minute read –
Deer species are hoofed, ruminant mammals forming the family Cervidae. The primary deer species in the Yukon include: Moose –  the largest of the species; Caribou, Elk and Mule and White-tailed Deer which have migrated in from Alberta and British Columbia over the past 250 years, Mule deer are very well established with their range documented to extend up to the Arctic circle1https://www.britannica.com/animal/mule-deer.

Many of the Preserve’s visitors are fascinated by the antlers, held by members of the cervid family, and ask many questions about them. This article will explain some of the basics on the annual growth and shedding of the antlers and how they play a critical role in the breeding cycle of these animals. We’ll focus on the largest and arguably one of the most Canadian iconic members of the deer family – the moose and his antlers. 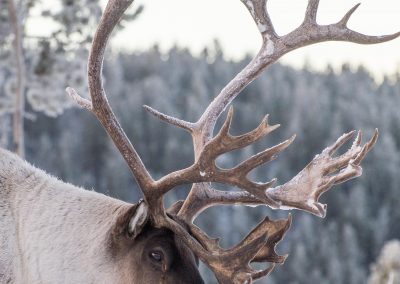 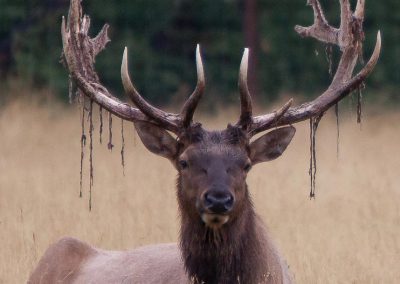 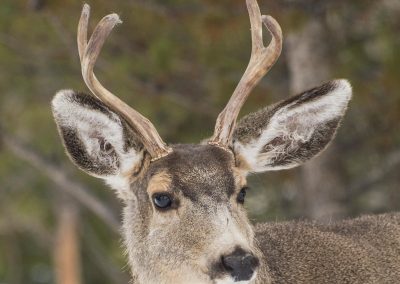 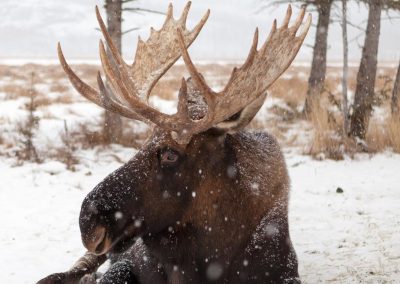 Let’s begin when last year’s antlers fall off sometime in the mid-winter following the conclusion of the breeding cycle. The antlers separate from the skull at the point of attachment called the pedicel – the base. The antlers – a growth of bone that is chemically altered to fatigue when the animal’s hormones change following the rut, (a term for the breeding season), which also coincides with shorter days and less sunlight. The cast off of the antlers at the pedicle produces an open wound. Like any open wound there is some amount of bleeding, but it does not appear to be a concern for the animal, the blood clots and is washed off by precipitation and a scab like covering develops. 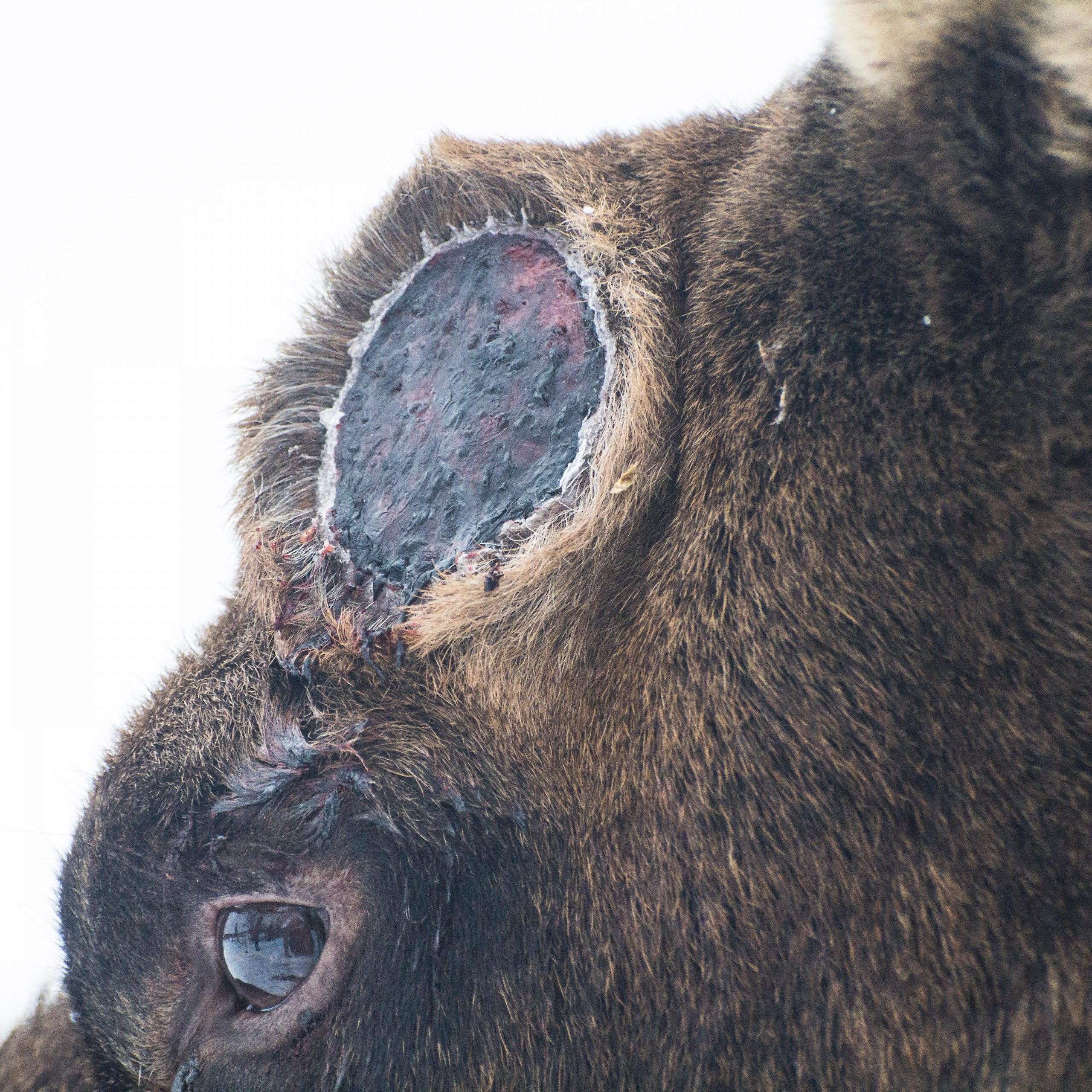 Antlers separate from the skull at the pedicel, typically in the winter months.

After a couple weeks the new antlers begin to form, and it is not like a tooth where a replacement pushes the old one out of the way in order to grow, it follows a different process. A new antler bud grows in the pedicle of the animal’s skull. Soon after the antler bud has grown for a few days a soft fuzzy fur-like material forms on the bony bud. This is antler velvet and it is an organ. It contains blood vessels, capillaries and nerves that facilitate the growth of the antler over the coming months. 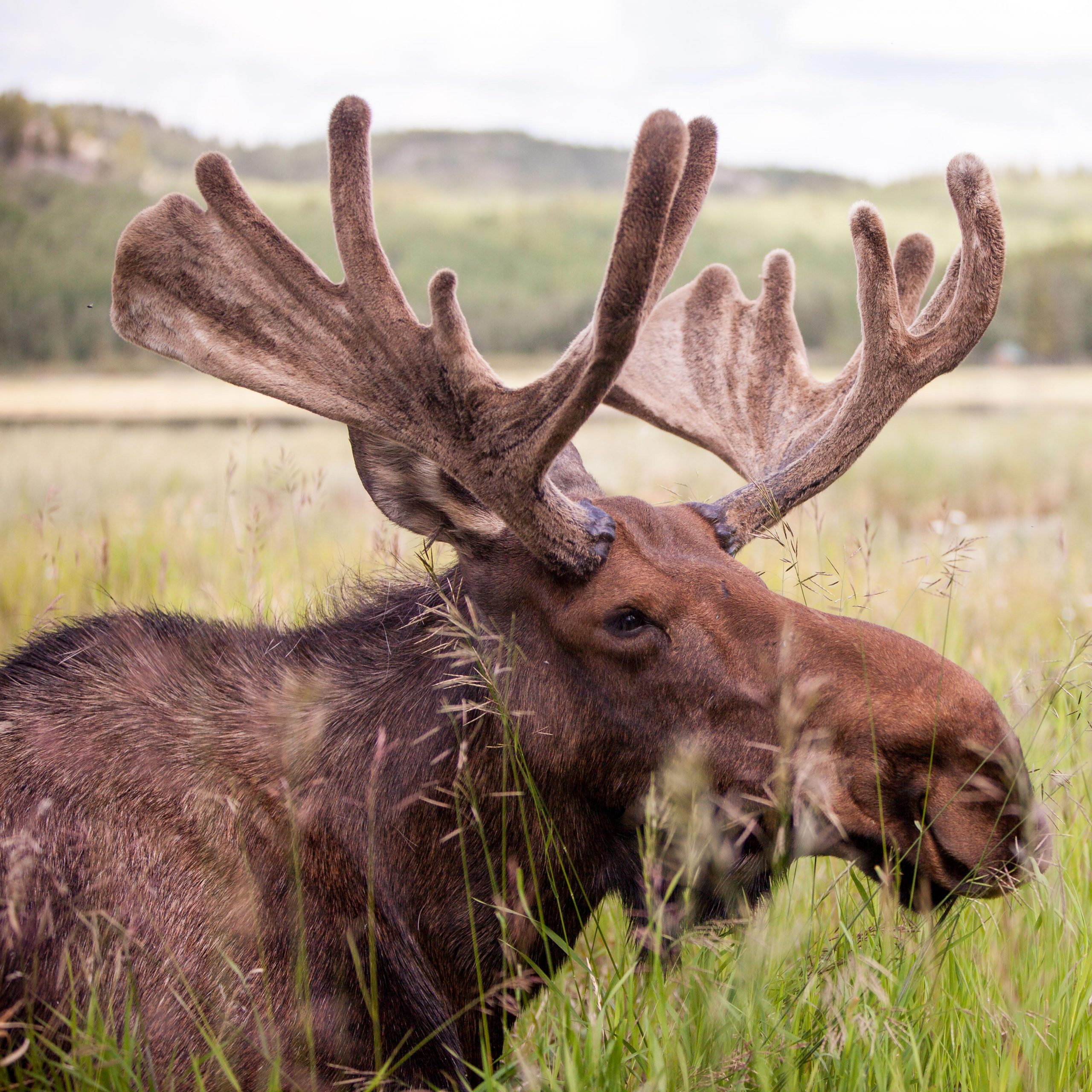 While antlers are growing they are engorged with blood and are quite soft and delicate, so much so that the animal is very cautious to not damage their new antlers in any way. If they do become broken or damaged, the animal is stuck with the injured or malformed antler until the next year when a new set will grow after shedding the damaged one later in the present year. A damaged antler may also develop into a ‘non-typical’ antler where it does not match the one on the other side and is often considered a deformity. As an antler bearing animal ages there is a shift in hormone levels, just like humans, and this can manifest in antler deformities or increased ‘non-typical’ tines. As for humans, aging and hormone changes can mean greying hair or more brittle bones. These malformations can spell misfortune for a bull when it comes to successfully fighting off males and attracting females in the rut – we’ll get to that soon!. 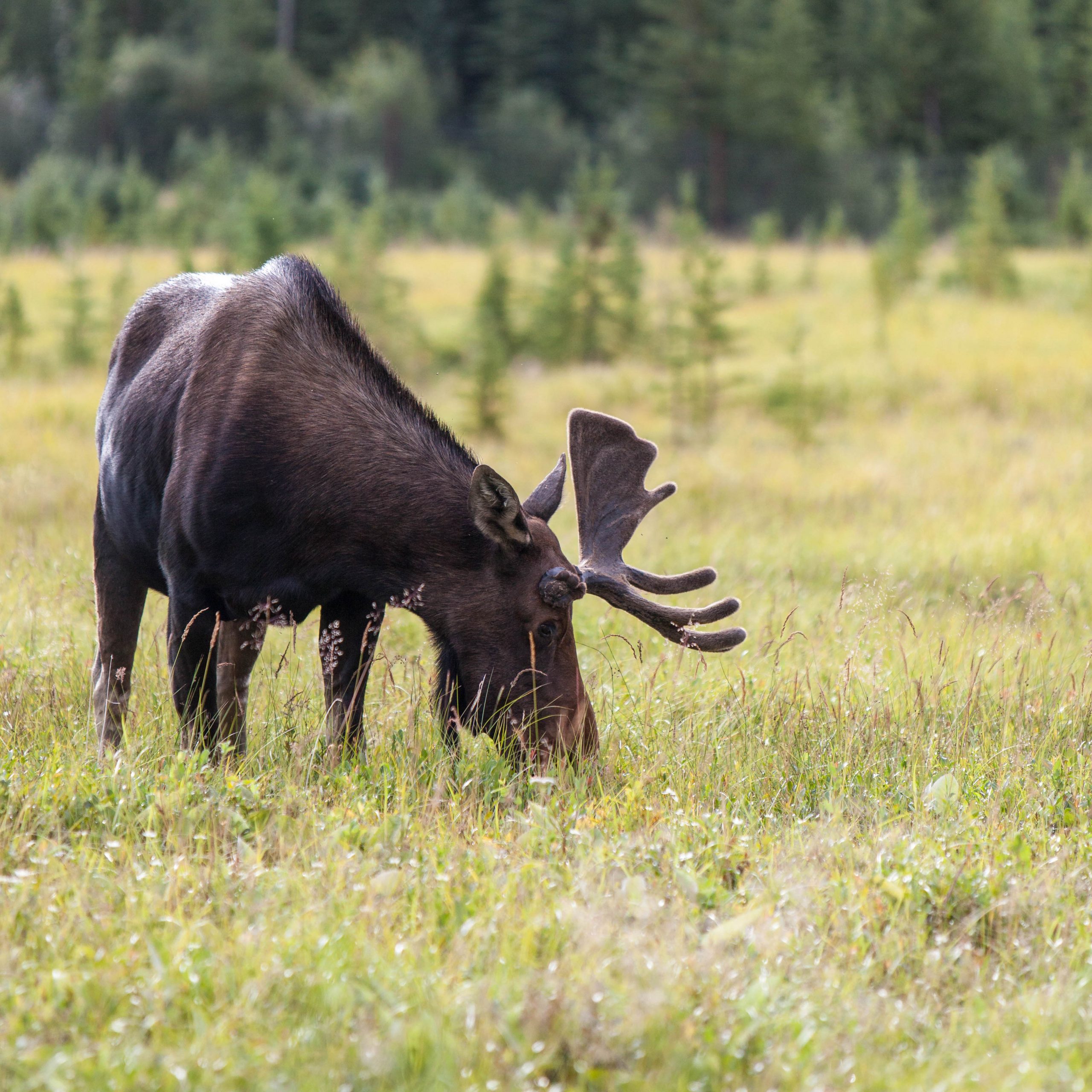 Antlers can be damaged during growth; asymmetrical antlers can be the result.  This can spell bad luck for a male when it comes to successfully fighting off males and attracting females.

Antlers grow very quickly. In fact, they are the fastest growing tissue of any mammal. If the animal has a rich and voluminous diet, moose antler growth can mean packing on a pound each day2http://www.adfg.alaska.gov/index.cfm?adfg=wildlifenews.view_article&articles_id=175, in the form of bone of course. Coastal moose in Alaska tend to grow the largest antlers due to the quality and diversity of plants that grow in the temperate coastal areas of their rain forests compared to the colder and less vegetated areas inland like the Yukon. These full sets of antlers are often referred to as a rack.

Moose happily browse the aquatic and terrestrial plants they prefer as their new antlers continue their rapid growth. The high levels of sodium found in aquatic plants help moose antlers to grow quickly. Moose adapt to the additional weight and mass of their antlers and can be very exacting in their use for scratching. They know where each antler tip is and how to control their movements with great precision. One of the most remarkable examples of how well moose can control themselves with a large rack is their ability to walk through a forest and not make a sound as they weave their way through the trees with the equivalent of a kitchen table upside down on their head. They can also scratch delicate parts of their anatomy with an antler tip with little fuss. 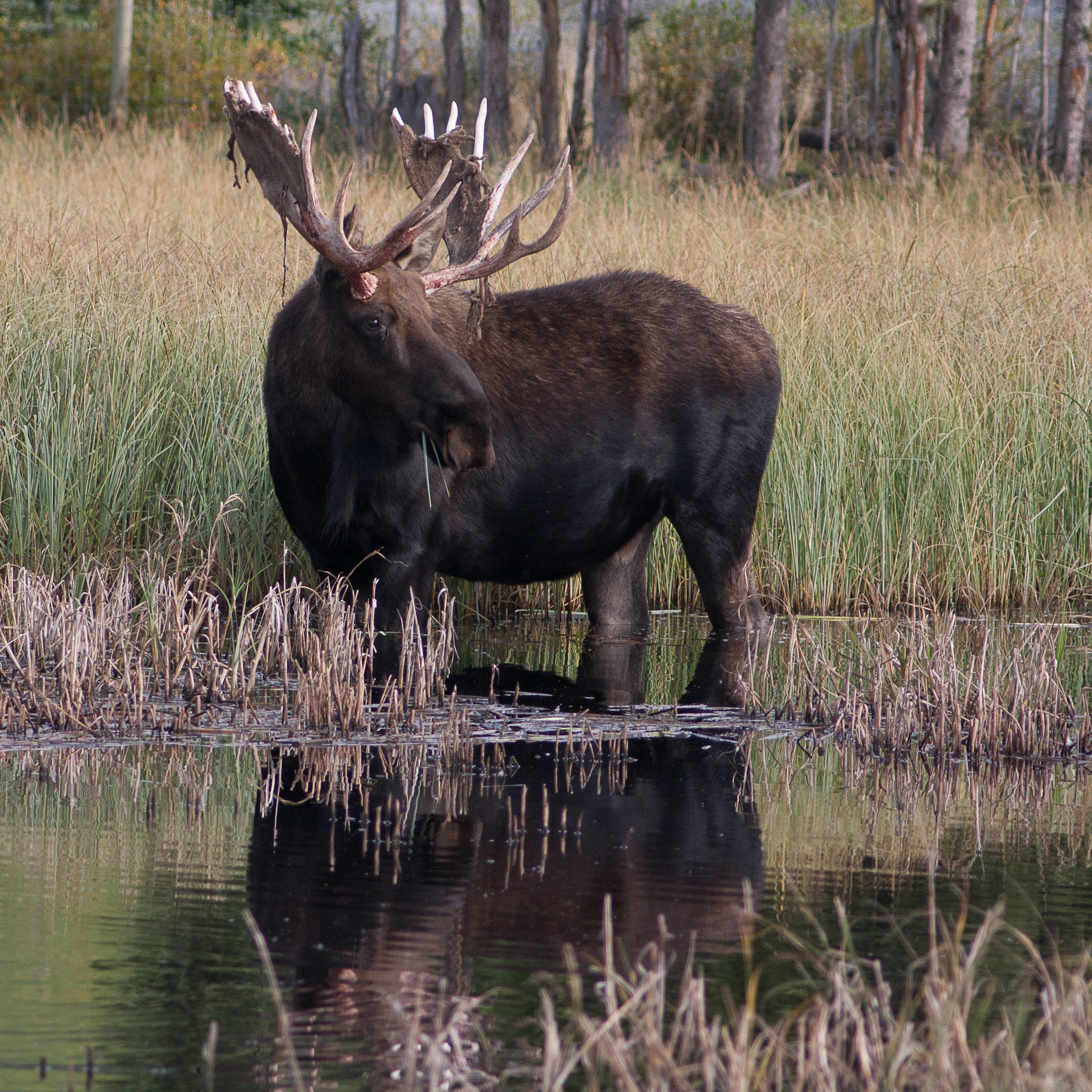 Over the summer season moose continue to gorge on vegetation as their antlers grow within the velvet encasing them, then a number of changes take place as the autumn season approaches. The first frost and dwindling day light is a turning point and triggers a hormonal change in the animal whereby blood flows back into the animal’s body and stops flowing to the antlers causing the velvet to dry after a few days and become itchy. At the same time bulls that are reproductively mature experience other hormonal changes in anticipation of the rut.

The itchy antler velvet gets rubbed off on trees and the bulls do not look their best as ribbons of bloody velvet hang from their antlers. As they dry, the antlers grow hard due to the process of mineralization and result in a two-type cartilage and bone structure3https://www.msudeer.msstate.edu/growth-cycle.php. The inner portion is less dense, spongy bone that has been highly vascularized during growth. The compact outer shell of the antler is of greater density and is very strong and solid and will become the weapons used when fighting other bulls during the rut which is coming up fast. 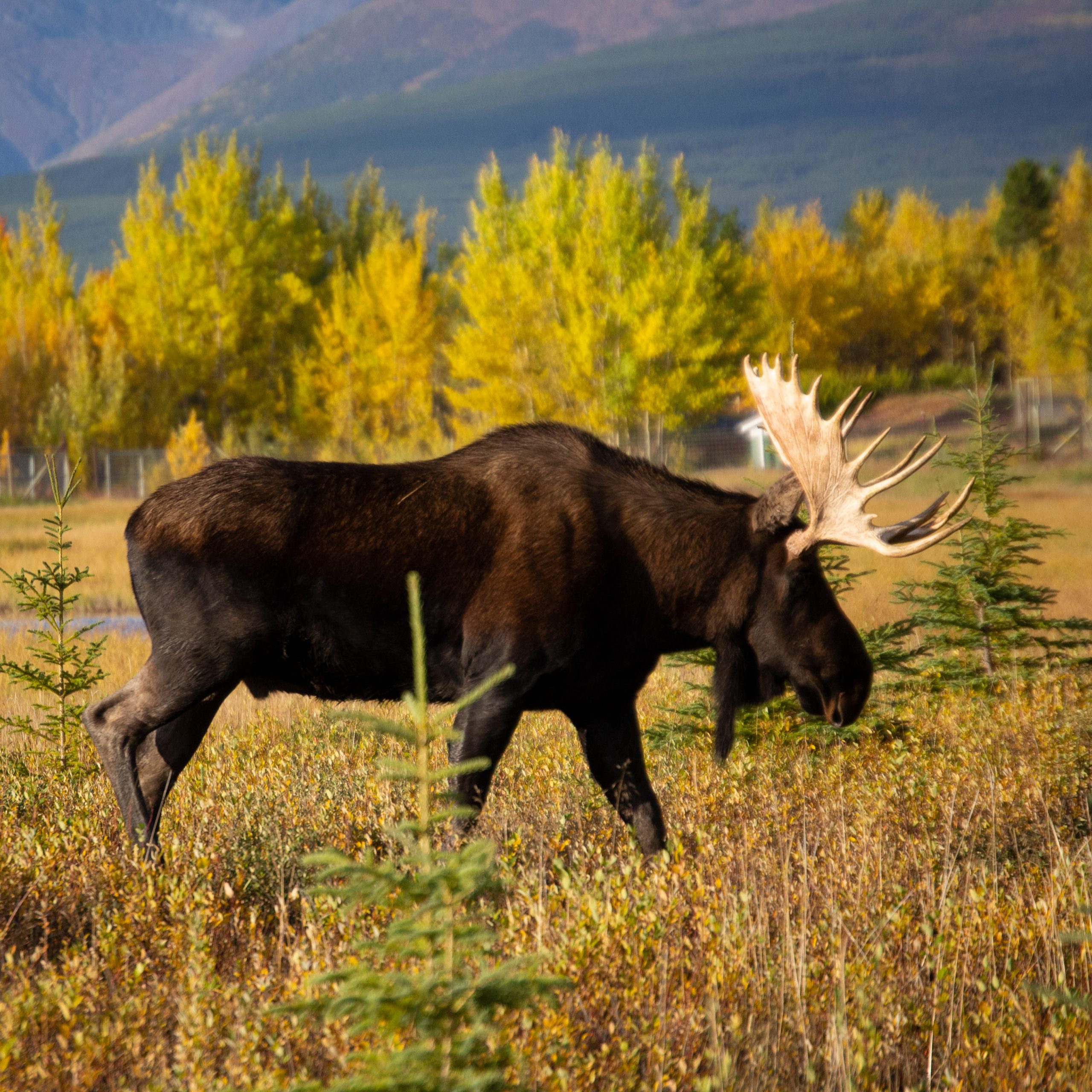 Once velvet has shed, antlers calcify becoming strong and solid.  Males are now ready to challenge each other for breeding rights to females.

In preparation for the competition among the bulls (males) to breed a cow (female), the bulls announce themselves by urinating on their bellies or sometimes on the ground and then roll in the mud produced. The purpose of this is to get their scent or pheromones to be carried on the breeze letting the cows know where he is; his readiness to mate and making it easier to be found. Of course other bull moose smell this too and a number of them will gather in a common location on a mountain pasture and their mating fights begin as the bulls gather for the annual main event.

Bears, wolves and other predators also smell the moose pheromones and for them it is like the ringing of a dinner bell and they too gather nearby to take advantage of the situation that will soon unfold. 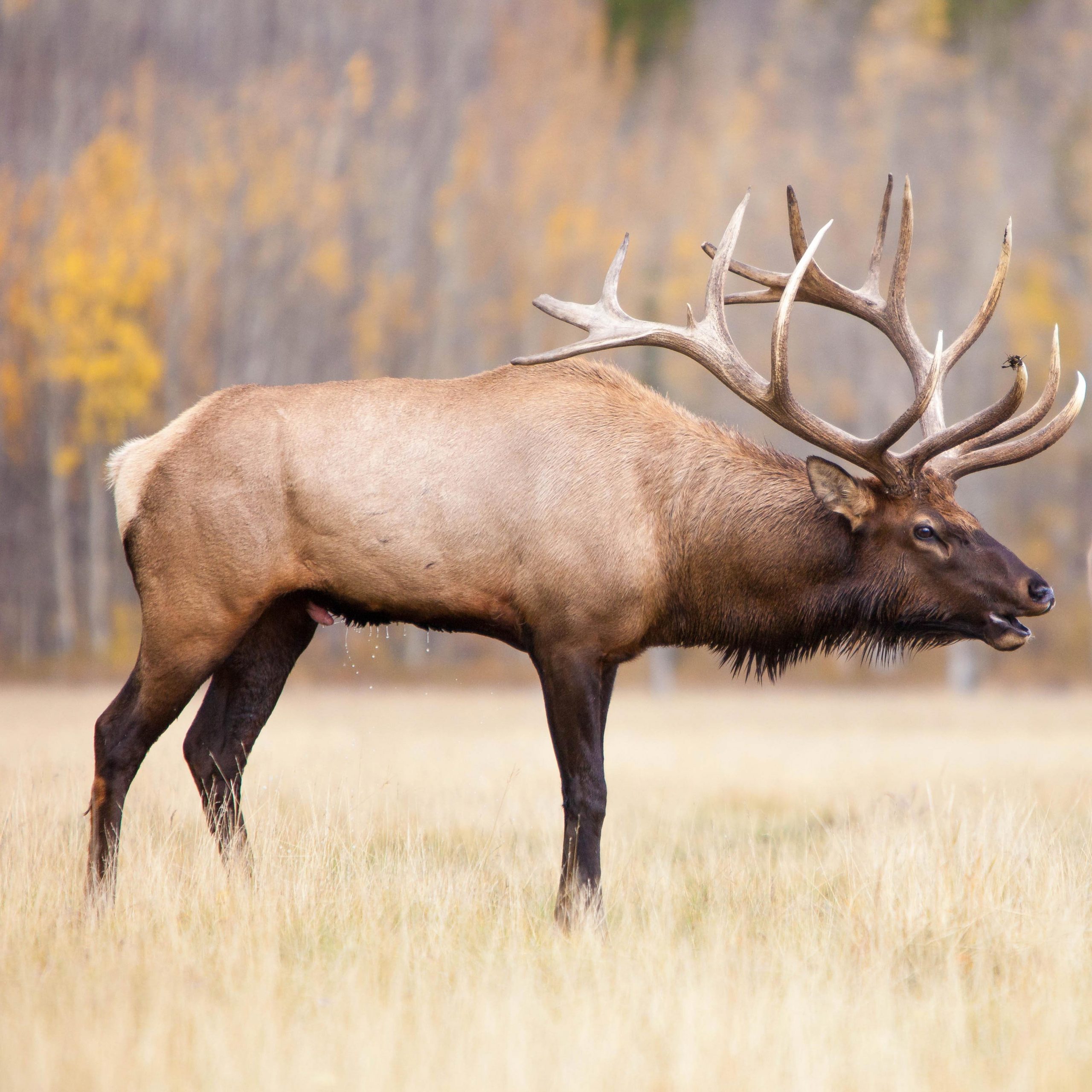 Elk males, like moose, may announce themselves by urinating on their bellies or sometimes on the ground and then roll in the mud produced

Bull moose stop eating when they go into the rut, partly because of the change in their hormones and also because they don’t have time as they are quite busy chasing other bulls away or fighting with them. Some moose can lose a substantial amount of weight when in the rut rendering them weaker and susceptible to greater injuries. Antlers can do some serious damage to other moose where an eye could be lost, a major organ could be pierced by an antler tip or many other injuries, such as muscle punctures could be sustained that would make it much easier for a grizzly to be successful in it’s hunt for food. That’s why predators hang around the rutting areas, it often results in injured moose bulls that are easier to overtake due to their wounds.

When the cow moose go into estrus or heat, they are only then ready to be bred. Some documentary TV programs elude that it is the bulls’ fighting prowess that determines which bull gets to mate, that may be true but it is not the only consideration. The cow still selects which bull she will mate with and it may be the result of the fights, or the appeal of the bull’s pheromones or other factors we are unaware of. But her goal is to produce the best offspring possible and how she makes that determination is her business. The cow will only breed once, while the bull’s goal is to breed as many cows as he can. 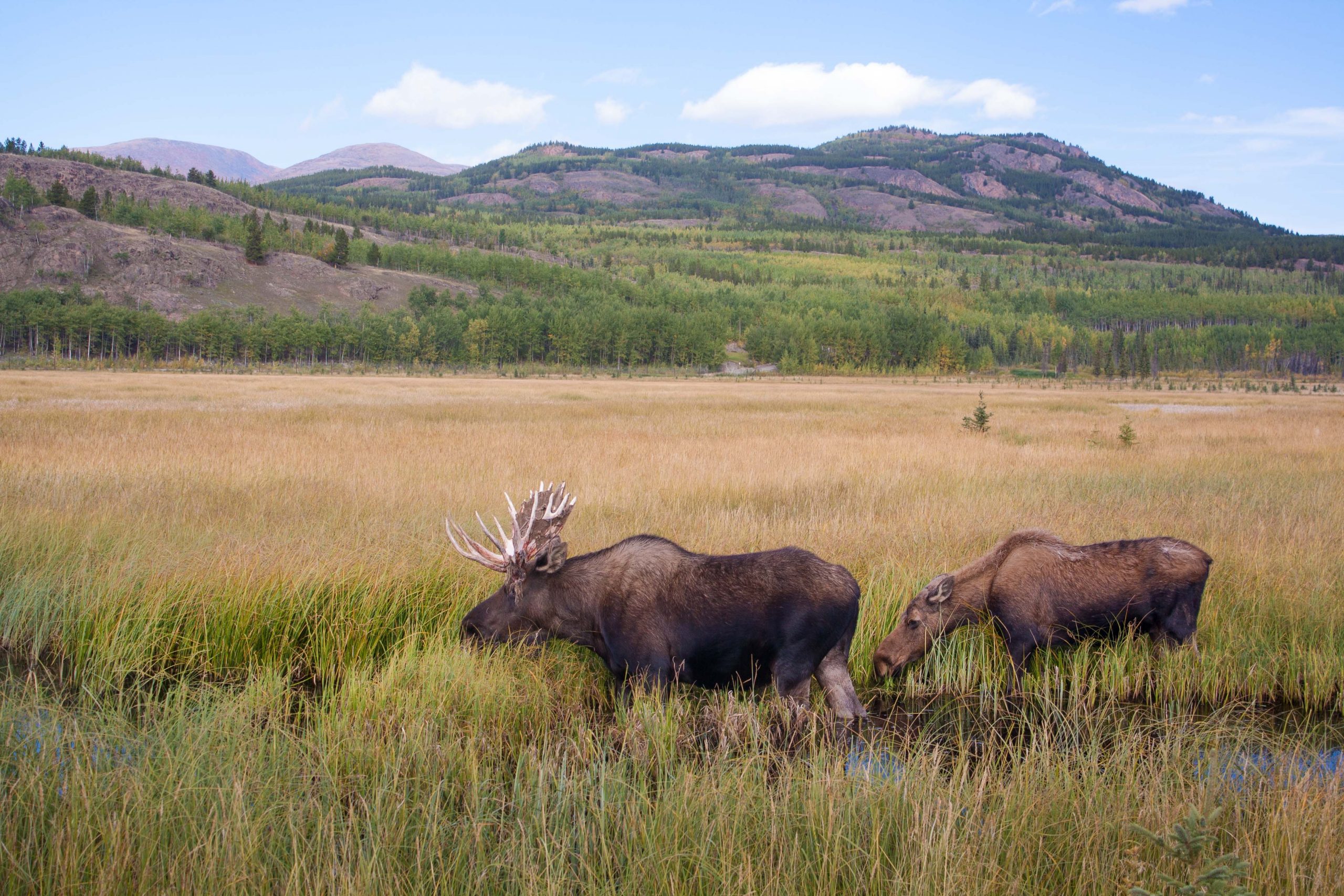 Once all the breeding is concluded, the cows and the bulls go their separate ways and will remain isolated from each other until next year’s breeding season occurs again. During this time, the bull’s antlers fall off and the antler cycle starts all over again.

Cow moose may give birth to a single calf or twins and sometimes triplets in the late spring after the ice and snow have turned to water once again. The bulls wander independently between the low river valleys and the mountain tops browsing while their new antlers grow as they evade predators until the rut calls them back to that special place where the breeding games begin anew.