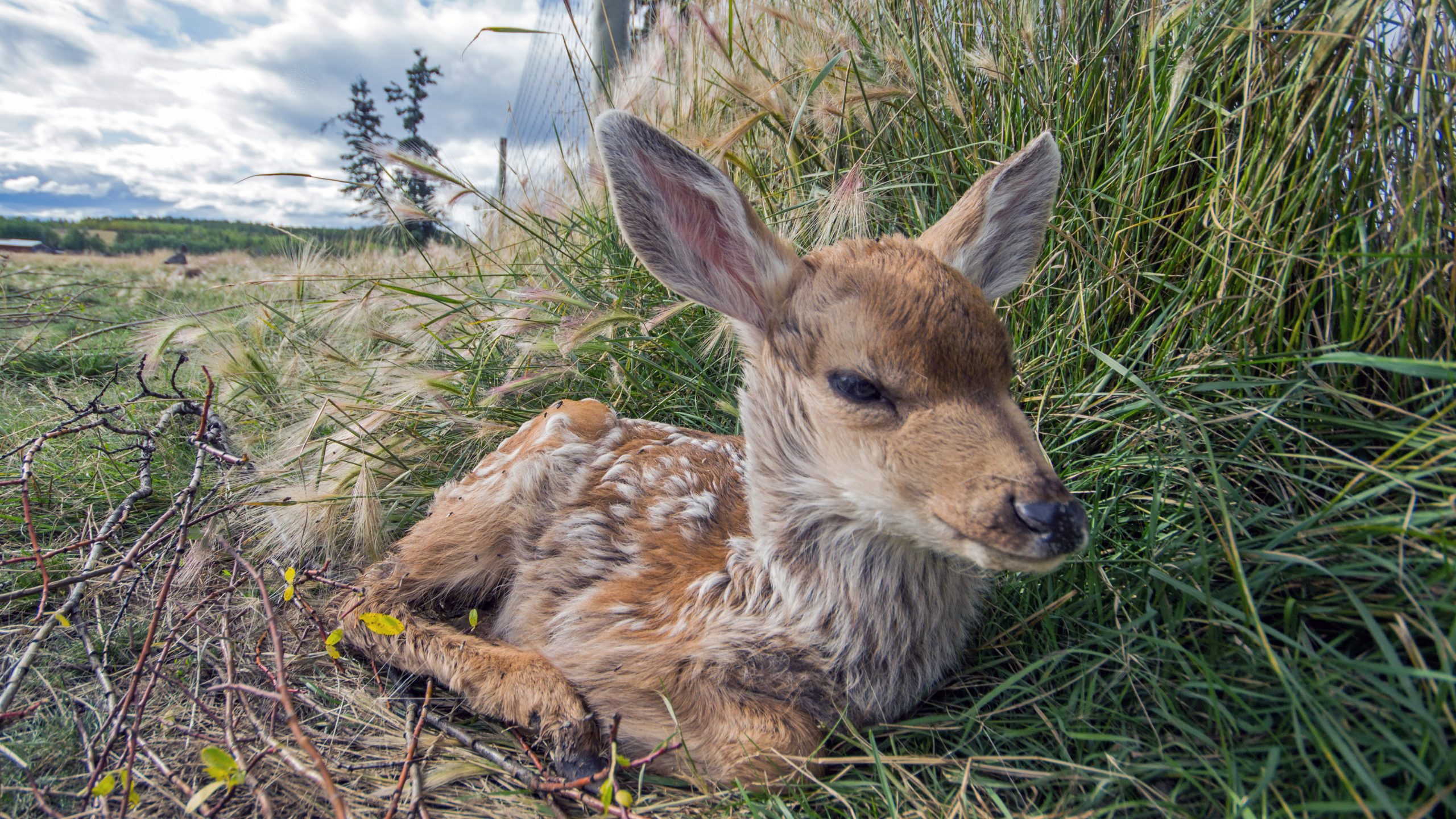 The Life of a Mule Deer

Watching how an animal behaves in its natural environment and towards other individuals has always been fascinating to me, but I could never have predicted that I would find myself crawling around the open prairie grassland to sneak up on mule deer.

Mule deer are an indigenous deer species to North America, ranging from as far south as central Mexico up all the way up to Dawson City, Yukon along the western half of the continent. Across their range, mule deer tend to be found in more open habitats along forest edges, in grasslands, and even deserts.  1Sanchez Rojas, G., & Gallina Tessaro, S. (2016). Odocoileus hemionus. The IUCN Red List of Threatened Species: e.T42393A22162113. https://dx.doi.org/10.2305/IUCN.UK.2016-1.RLTS.T42393A22162113.en. 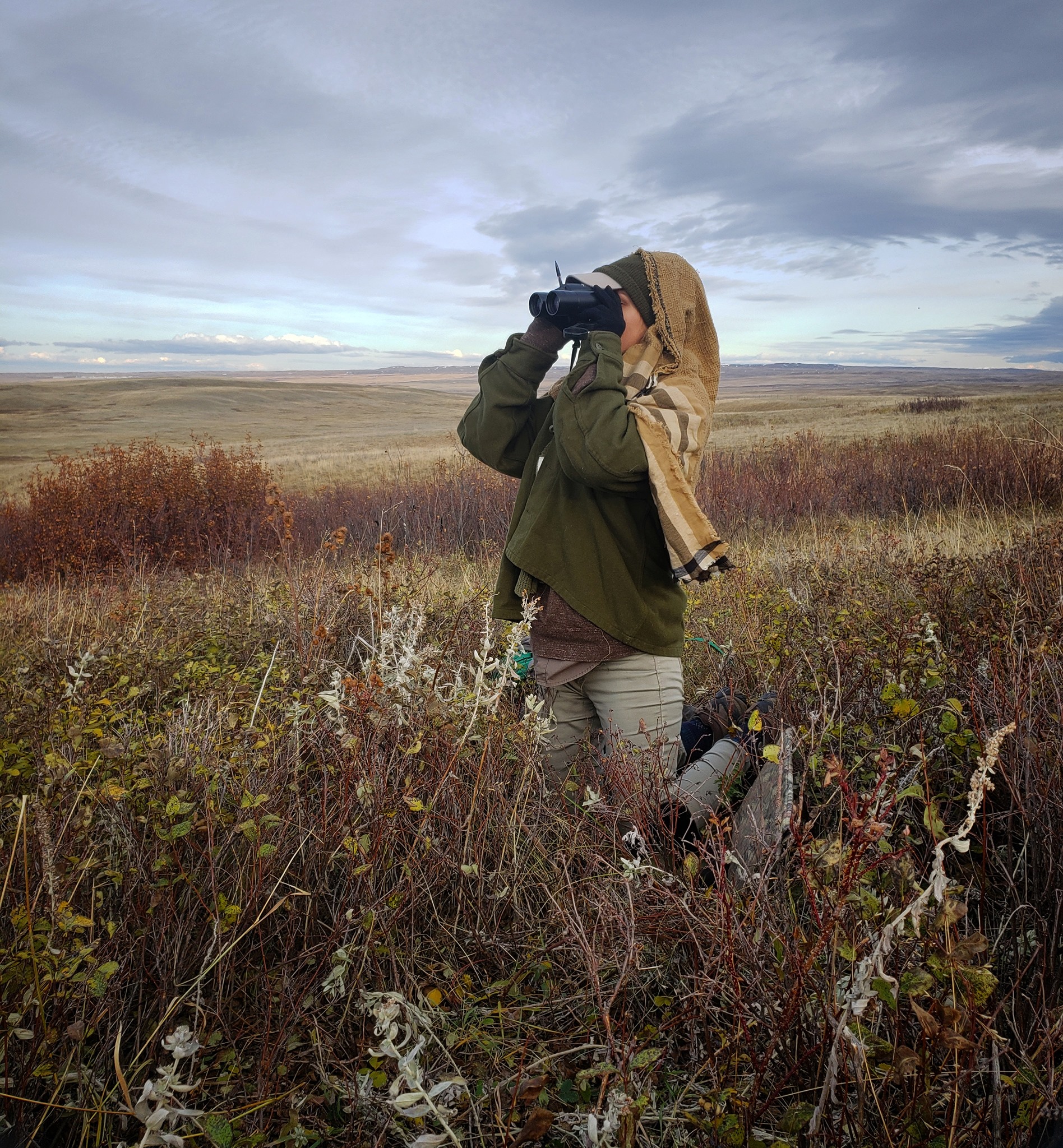 A good friend and colleague of mine spent our summer days searching for mule deer fawns to watch how these little animals played and how much of their days consisted of playing.

A mule deer fawn’s life begins around late-May to mid-June, born to a female who is at least two years old. The fawn may be the only off-spring or may have a twin depending on the mom’s health and the amount of food that was available the previous summer.  A newborn fawn has spots on their fur which helps to break up their outline allowing them to hide in long grass. The little fawn will remain close to mom for their first summer, relying on mom’s milk for the first five months before they start to graze on vegetation, then becoming fully independent after a year2 Geist, V. (1981). Behavior: adaptive strategies in mule deer. In O.C. Wallmo (Ed.), Mule and black-tailed deer of North America (pp. 157-224). Lincoln, NE: University of Nebraska. . 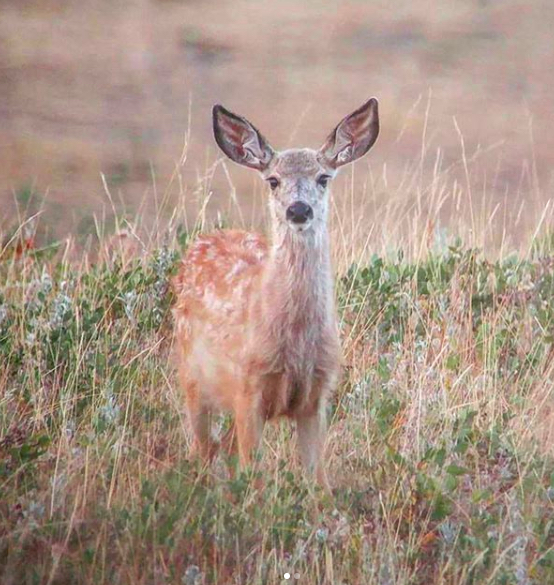 For us to watch the deer’s behaviour without influencing them, we needed to be extremely stealthy.

Named for their large ears, mule deer are well suited for living on open and rugged terrain. When detecting a sound, their ears can move independently of one another to allow the deer to hone in on a sound. Their eyes placed on the side of their head allow them to have up to a 310 degree view around themselves.  3Wishart, W. D. (1986). White-tailed deer and mule deer. In Alberta Fish and Game Association (Ed.), Alberta wildlife trophies (pp. 134-143). Edmonton, AB: Alberta Fish and Game Association.

Both of these senses give mule deer an advantage in detecting predators (and us) from far distances, even up to 1km away!   4Lingle, S. (2001). Detection and avoidance of predators in white-tailed deer (Odocoileus virginianus) and mule deer (O. hemionus). Ethology, 107, 125-147.   This is especially important in a wide open space where the predators are also able to spot their prey from afar.

We would hike into the prairie with all of the gear we needed – spotting scopes, tripods, a video camera and plenty of paper to document what we saw. We would wear clothing that matched the seasonal grasses (vibrant green in the spring transitioning to browns in the late summer), and layered different colours and patterns to break up our outline, just like the fawns do with their fur patterns.

At times we would make the deer alert to our presence. When alarmed, and especially when they were trying to figure out what type of animal we were, mule deer would stomp one of their front hooves on the ground, move around us to try to get a better view, and make repeated snort vocalizations. The sound of the snort and the stomp, along with releasing an alarm scent from a gland on their hind limbs, functions to alert other deer in the area to potential danger. Females were especially persistent with getting us to show ourselves, which at times we had to scare her away to prevent her from alerting every deer in an area.

Mule deer are generally more stocky and unable to run as fast as say a coyote. Typically, mule deer can reach speeds of 50km/h, but a coyote can run upwards of 70km/h, making it difficult for mule deer to outdistance them. Instead when threatened, mule deer will move on to steeper terrain if available nearby, bunch up together, and confront the predator.  5Lingle, S., Pellis, S., & Wilson, F.W. (2005)  Interspecific variation in antipredator behaviour leads to differential vulnerability of mule deer and white-tailed deer fawns early in life. 6Journal of Animal Ecology, 74(6), 1140-1149.  When a fawn is in danger of being attacked, they will let out a high-pitched distress cry that causes mom to become alert and quickly find her fawn and whoever is attempting to grab them. What’s interesting is that this call will attract all mule deer moms in the area to the fawn regardless of whether the fawn is their own or the fawn of another individual. The females will then group together and perform a coordinated attack using their hooves to kick and stomp at the predator. 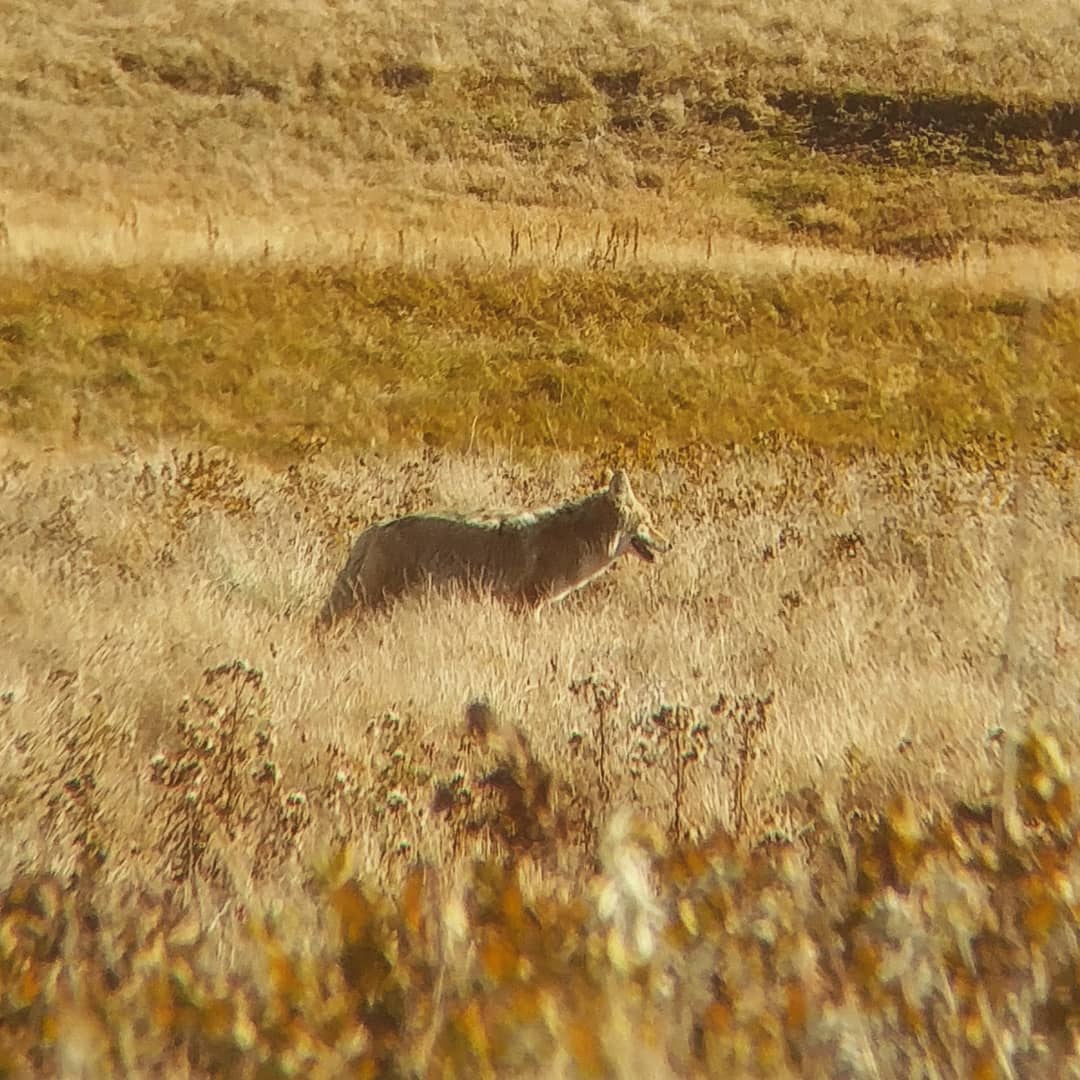 Coyote seen looking for preferred prey like deer. A coyote can also camoflauge well into their landscape.

We never got close enough to elicit this level of antipredator reaction, nor did we want to. We aimed to be quiet and unknown so we could slip in and out of an area without causing undue stress to the animals.

We watched the fawns from when they were born in May, to when they were becoming independent and lanky teens in the late-summer. During this time, we could also see the adult mule deer groups shifting as the seasons changed.

In early spring, pregnant females will stay separate from other deer to give birth in their home range area. Our team can reliably identify deer based on their features, such as markings or scars on the face and/or body, size and shape of the white rump patch, tail length and colouration, and antler size and shape if they are males. Using their distinct features, we could go back into an area year after year and find the same females and her fawns in their homes. The only presence that would really move the deer out of an area would be the grizzly bears and to a lesser extent, coyotes. It seemed to be a dance to figure out week by week where the deer had shifted to if the grizzlies had moved through. After the predators moved on, those same reliable females would take back their homes once more.

As the summer wore on, females and fawns began to come together and spend their time in small groups. There were areas we named “nurseries” where it seemed that the females dropped their fawns together before moving on to graze, apparently taking advantage of the collective antipredator strategy females use.

At the same time, the males were in the bachelor groups or the “dude crews” as we referred to them. They too would be in a consistent area, forming groups of usually 5-10 males of various ages and generally be pretty relaxed looking, staying bedded for the majority of the day. But while they may look lazy, they were really investing a lot of energy into growing their antlers and prepping for the rut (their breeding season). 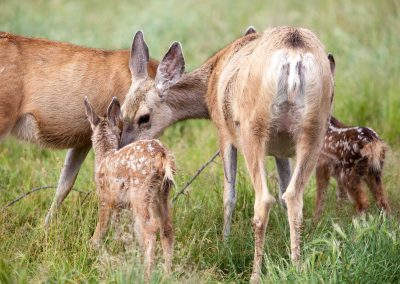 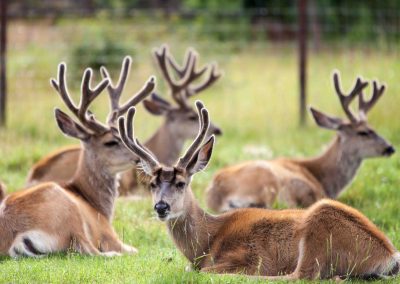 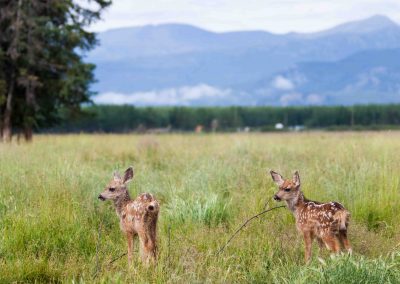 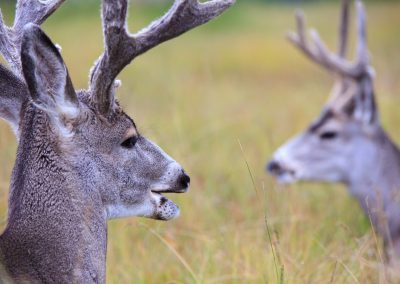 During the rut, males and females will form larger groups together along with the fawns of that summer and the previous summer’s juveniles. Males fight for access to females who become receptive around the same time in mid-November (although there are some females who are earlier in October and some later into December)2. Into the winter, mule deer of all ages and both sexes stay together in large groups of up to 100 individuals. This is a safety in numbers game to protect them from predators, especially from coyotes whose only available prey are deer since the small rodents such as ground squirrels are hibernating. When spring comes around, the cycle of behaviour patterns continues. 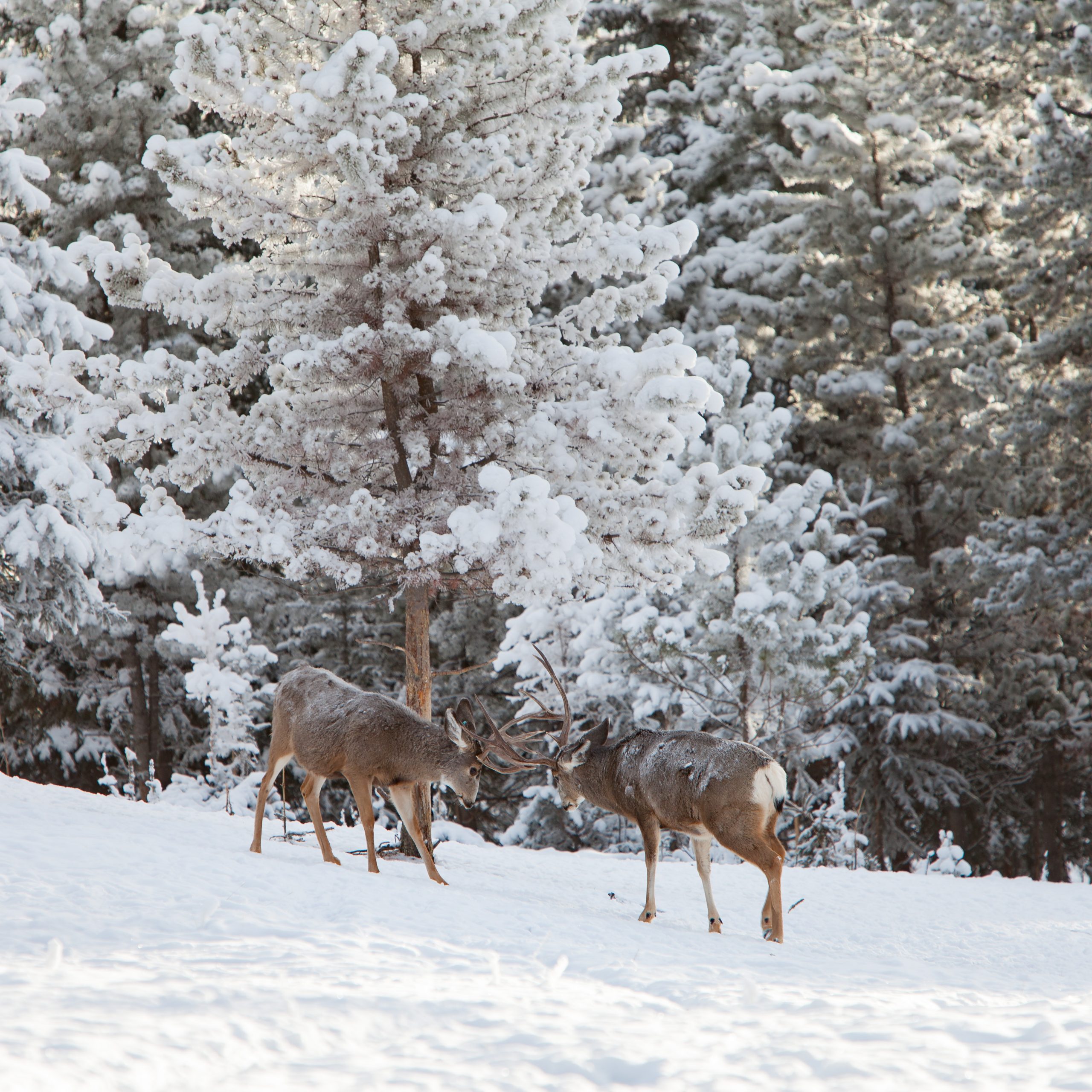 Mule deer seem to have an intricate life balancing the ongoing risk of predators, to solving dominance disputes with one another, to looking out for their babies, all influenced by their own individual personalities and the areas they call their homes. Watching animals can give us a new perspective on the animals that live amongst us, and let us know that they are just as complex as us and deserve to have wild spaces left for them to live. 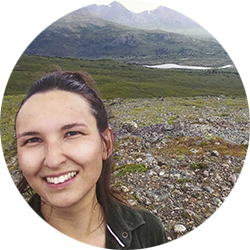 Rebecca joined the Wildlife Preserve in the summer of 2020 after moving from Manitoba to the beautiful and wild Yukon. Rebecca earned a degree in Biology with honours from the University of Winnipeg studying behaviour in mule deer (one of her top 20 favourite animals.. it’s hard to choose!). She loves connecting with others through nature and sharing stories and knowledge about the animals at the preserve with visitors.