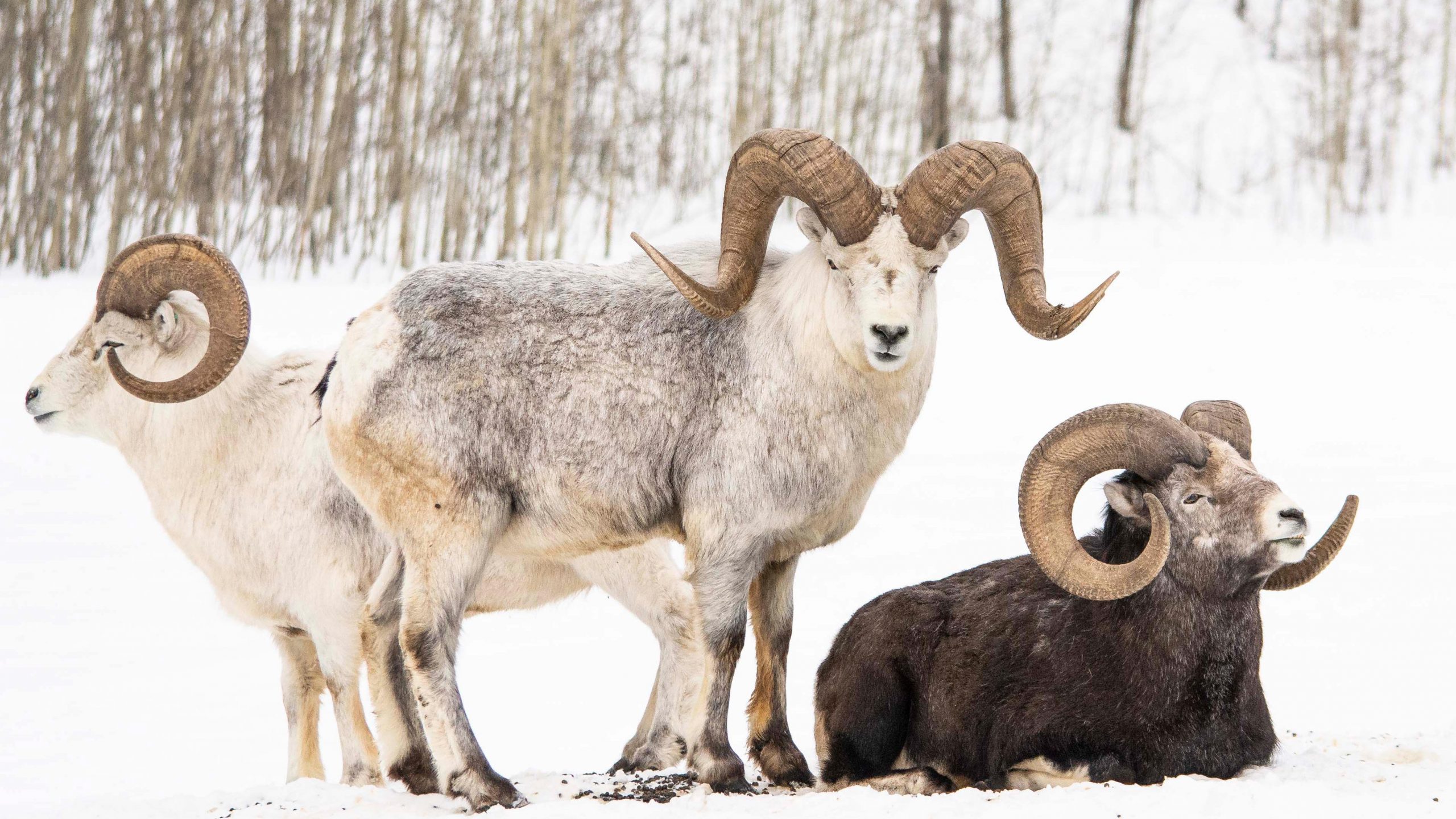 10 minute read –
For a long time, it was believed that there are three distinct subspecies of thinhorn Mountain Sheep in North America each of these known as: Dall, Fannin and Stone. Each subspecies displayed different colouring of their coats where Dall would be pure white, Fannin would be white with grey, silver and black highlights and Stone sheep were white with brown and black highlights and sometimes predominantly all dark grey. 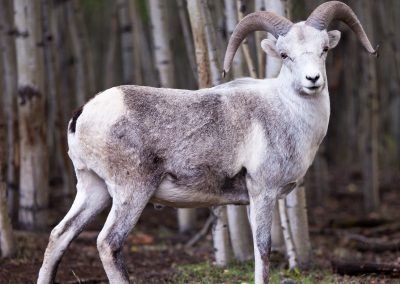 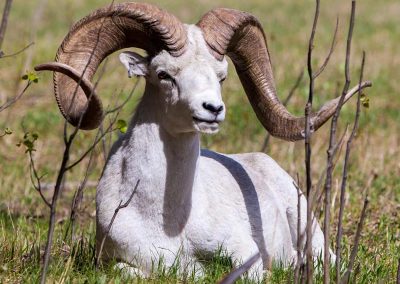 Recent DNA gathering and analysis has revealed that all three subspecies are actually very much alike and identification of each subspecies is becoming significantly more difficult to confirm as interbreeding continues and identifiable traits or genetic markers blend together to produce a mongrelized modern day specimen.

Further, evolutionary biologists[1]https://www.ualberta.ca/science/news/2016/june/dna-analysis-rewrites-the-story-of-thinhorn-sheep-during-the-last-ice-age.html studying the lineages of thinhorn sheep have found evidence suggesting that the species diverged hundreds of thousands of years earlier than previously thought. Greatly influenced by the formation, movement and final melting of the glaciers, thinhorn sheep roamed a vast area in search of ice-free grazing areas known as refugia. The mountainous geography often separated groups of similar or same subspecies sheep where through isolation they accumulated some variances between populations over time, sometimes resulting in the formation of what were originally thought to be new subspecies due to variations of their physical appearance.

Genetic science continues to study these animals and new proofs are foreseen to reveal how the present thinhorn sheep populations of the Yukon, BC and Alaska evolved to be what they are today. As genetic scientists work with data gathered by paleontologists, geologists and other scientific disciplines, there is anticipated to be a more accurate understanding of how northern animals evolved into what they are today. 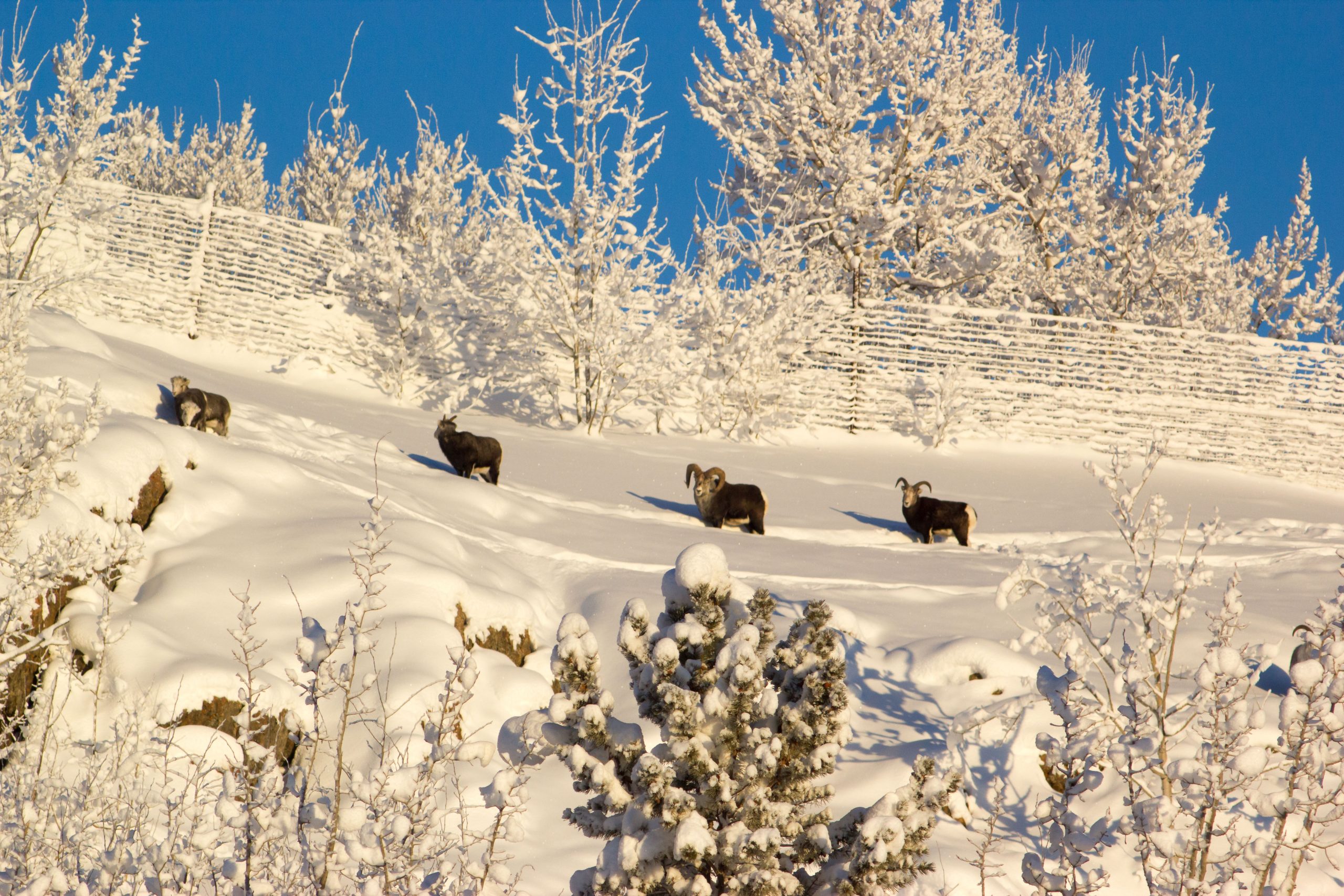 Despite their uniqueness in genes and variations in colour, thinhorn sheep rams share the same impressive set of horns that are admired in the animal kingdom. It is important to note that horns and antlers are not the same. Members of the deer family grow antlers which are shed and grow back each year, while sheep grow horns which are with the animal for all of its life. Also antlers grow from the tips while horns grow from the base.[2]https://medium.com/usfws/11-facts-about-antlers-18e689fe9e60#:~:text=Bison%2C%20antelopes%2C%20sheep%2C%20goats%20and%20domestic%20cattle%20%E2%80%94,from%20the%20tip%3B%20horns%20grow%20from%20the%20base  It’s a minor thing, but important because if a young sheep breaks off a tip of their horn, it will remain that way for the rest of its life. Female sheep or ewes also grow horns but these are much more diminutive than the male sheeps’ horns. 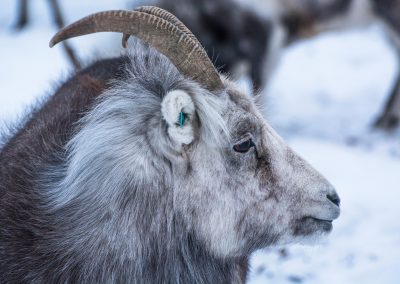 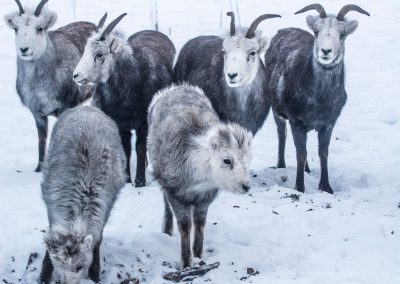 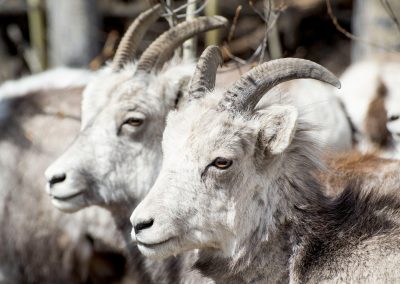 ​ Female sheep or ewes also grow horns but these are much more diminutive than the male sheeps’ horns.

Sheep start to grow their horns shortly after birth and they will continue to grow over their lifespan, sometimes up to 20 years of age.[3]http://www.env.gov.bc.ca/wld/documents/thinhorn.pdf If you look closely at a ram’s horns you’ll see rings that circle the horn in various locations. These are called growth rings or annuli rings and a new one is formed each year and they are a reliable method to estimate the age of the animal. The horns are made of keratin, which is the same hard material that their hooves are made of and it grows quickly.

The first few inches of horn that a ram grows is called a lamb tip and represents about the first 6 months of the animal’s life,[4]https://www.adfg.alaska.gov/static/hunting/dallsheephunting/pdfs/dall_sheep_guide_to_judging_sheep_horns_under_full_curl_regulation.pdf it often gets broken off as the ram’s life of fighting and careless use take their toll. 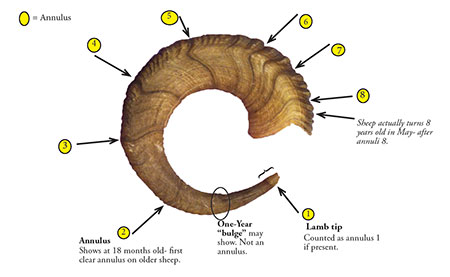 Each year a new annuli ring is formed near the base due to stressors the ram experiences, normally associated with the mating season.  You may notice that the space between the annuli rings is not uniform. This reflects the quality of nutrition that the animal experienced during that year of his life. Large wide spaces between the rings indicate good nutritional intake and low stress. Small thinner spaces may indicate a stressful year or a reduction in nourishment possibly associated with long, hard winters, forest fires and a loss of grazing, avoiding predators and similar stressors found in nature. Once the ram reaches a certain age of maturity, at about eight years,[5]https://www.coniferousforest.com/dall-sheep.htm the horns will continue filling out in thickness and mass, but stop growing longer as time goes on. A mature ram’s horns can weigh up to 15 kilos – more than all the bones in his body combined.
The size and shape of ram’s horns are what distinguish it from others and there is a wide variety of shapes, formations and sizes among sheep horns. Some horns form concise symmetric circles that are located close to the animal’s head, while others grow into a cork-screw-like shape where the tips are splayed out from the ram’s head. Some rams have horns that are thicker and longer than others, this is normally associated to a genetic trait of the animal’s ancestors where the influencing genes get passed to subsequent generations. 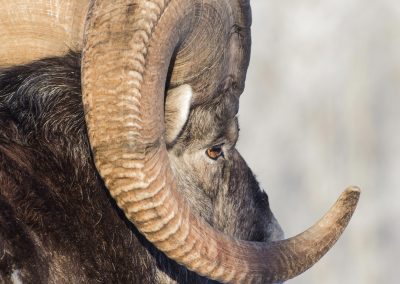 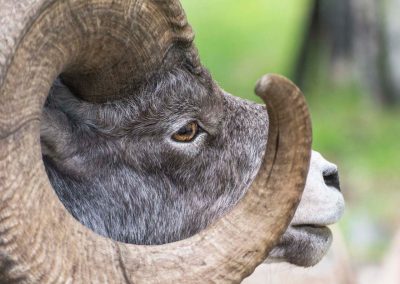 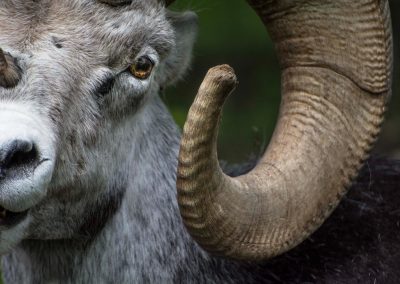 Hunting organizations such as Boone & Crockette have devised an elaborate measuring system with which to score the horns of most big game animals. The horns are measured at specific locations including the base, the overall length of the horn on each side, the distance between the horn tips and diameters of the horn in four key places. Once these measurements are collected some math is performed to arrive at the score for that ram’s horns. Records are kept by species so that hunters know how their harvested ram compares to others. This record keeping is also valuable for biologists and others to track the various changes in sheep populations around the world and may indicate declines in health, and their supporting environment and other influences which may be indicated by the changing size or condition of their horns.

Regional governments also utilize hunters to gather important data from the field. This is usually done by making it mandatory that certain parts of the harvested animal are submitted to the Game Branch as a condition of the species harvest tag. In this way biologists get to examine a diversity of a certain species all harvested within a quantified period of time and noted locations. Biologists examining sheep submissions here in the Yukon check for a number of important indicators. Yukon regulations require the complete head of a harvested ram be submitted for inspection.[[[https://yukon.ca/sites/yukon.ca/files/env/env-yukon-hunting-regulations-summary_en.pdf]]

The first thing they examine is if the horns are indeed a full curl as regulations prohibit harvesting a ram that is less than a full curl.

The biologists then extract a tooth to confirm the exact age of the animal by cutting the top off and counting the rings similar to the dendral or age rings of a tree. They may also take a tissue or blood sample to test for various diseases and infections the animals may suffer from. When all the tests have been completed the biologist bores a small hole in the top side of the horn facing the rear and epoxies a serialized aluminum plug into it. These plugs help to combat the underground trade of animal heads by having each head recorded by hunter, date and location.

Having access to all this data helps biologists to better understand the health of the wild sheep herds and may provide clues on where a disease is developing and which way it may be moving geographically. 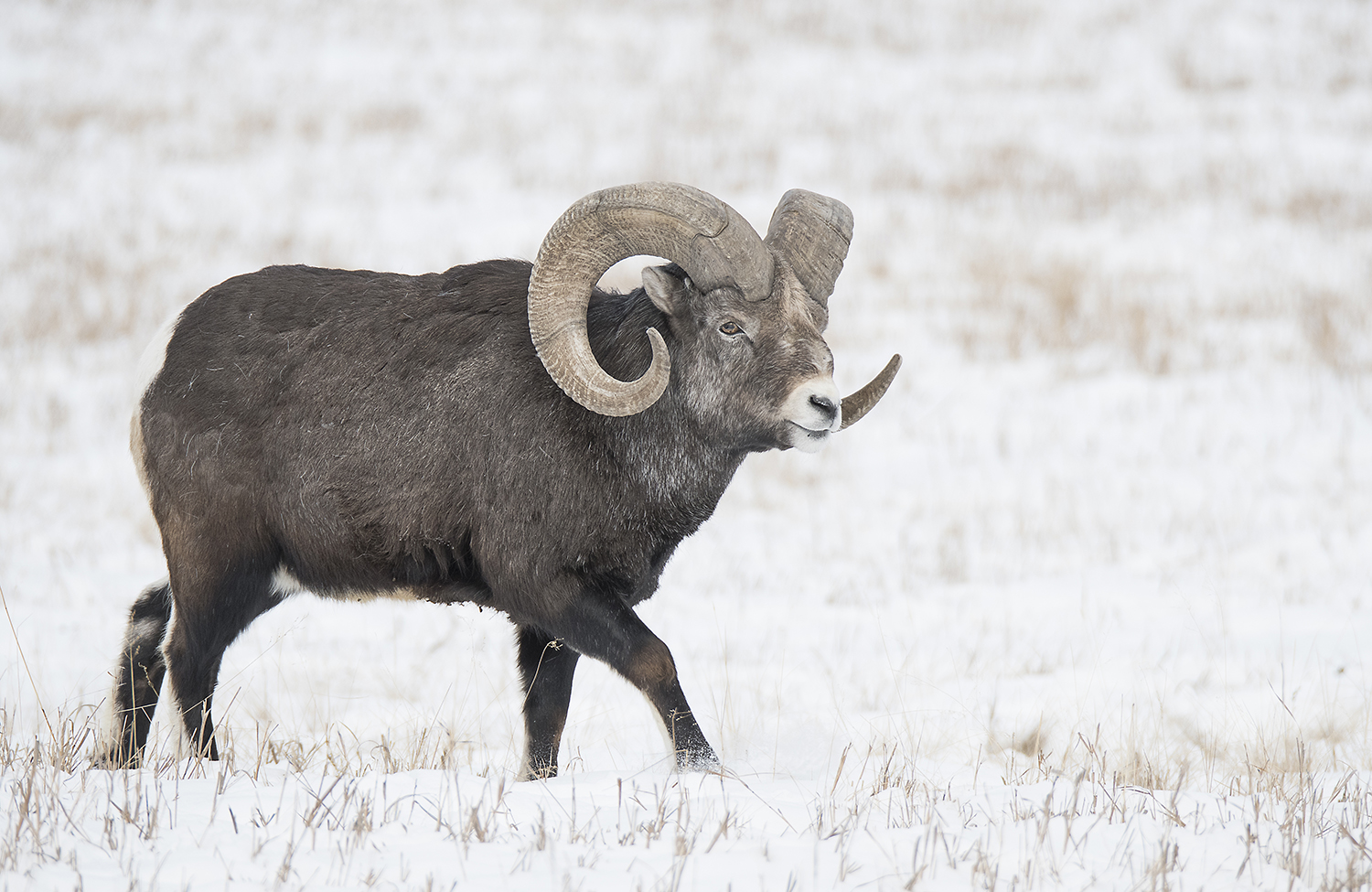 Rams are famous for bashing their horns together to determine which is dominant for breeding purposes, but that is only for a few days each breeding season typically in late November and December. They also use their horns to communicate among themselves in ways that humans can only guess at. They will sometimes interlace their horns gently and rub their ears together which appears to be a welcoming gesture. Like most creatures, mountain sheep use body language to communicate with others. It may be a twisting of the head or extending their noses while they peel their lips back to reveal their teeth, or something as simple as their stance and how they wiggle their ears as they stare at others from a distance. They often grunt at each other as well.

Rams will often gently head-butt  each other as a form of greeting, similar to how a house cat bumps your leg when seeking attention. They can be quite gentle in their horn touching activities or they will get up on their hind legs and really lean into butting another ram with all the force they can muster. 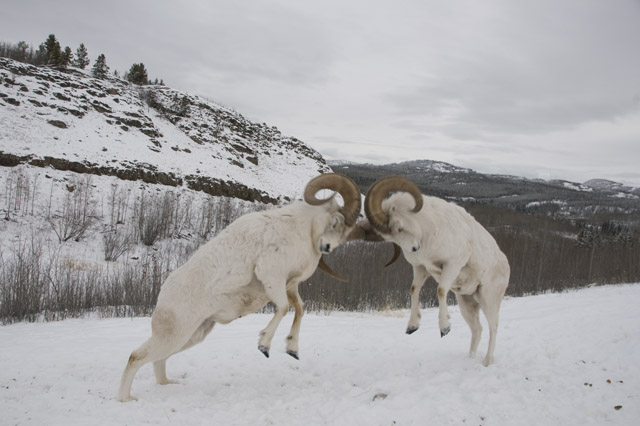 With remarkable muscle tone, balance and coordination mountain sheep demonstrate how well they have adapted to living on rock faces as they frolic and cavort in situations humans try to avoid. Often it will take a human significantly longer to cover a vertical climb it only took a few seconds for the sheep to navigate. Mountain sheep are remarkably strong and have endurance that allows them the energy and stamina to evade predators such as wolves and bears on the uneven and precarious mountain slopes they call home. Young lambs are a popular target for migrating Golden Eagles arriving in the spring season from their over-winter habitats. So sheep must be watching in all directions for potential dangers that could impact on them or their offspring. 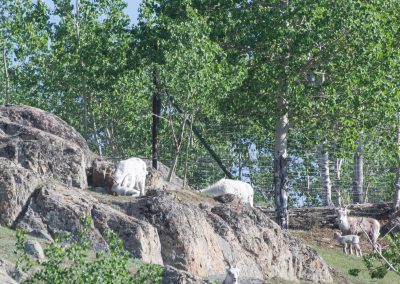 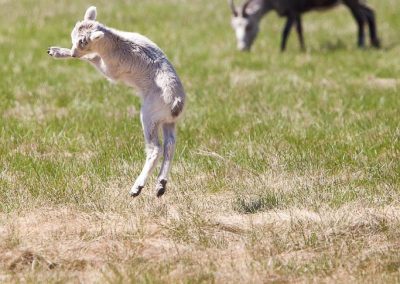 Young lambs are a popular target for migrating Golden Eagles.  Ewes must be watching in all directions for potential dangers that could impact them or their offspring.

Mountain sheep have superior eyesight for distance and low-light conditions, they have horizontal pupils that help them to see panoramically to detect predators that could approach from different directions.  They also need to be able to see forward clearly so that they can run over rough terrain. They have excellent peripheral vision and can see behind themselves without turning their heads due to where their eyes are located on their skulls. Remember they need to look around their horns too.

Thinhorn Mountain Sheep are remarkable creatures perfectly adapted to thrive on the mountains of Northwestern Canada and Alaska and will remain a featured megafauna species here at the Yukon Wildlife Preserve. 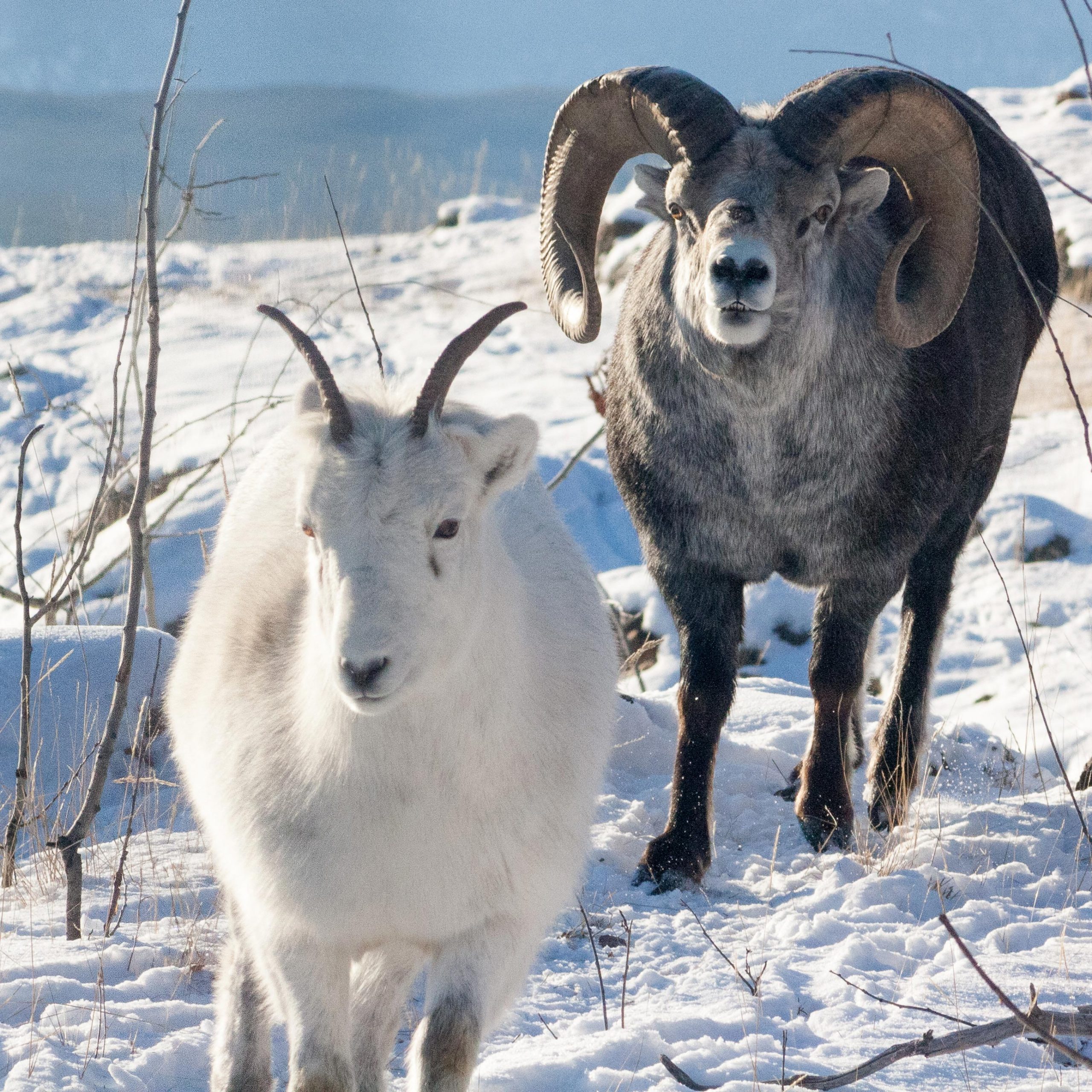