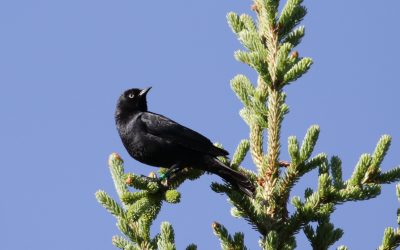 Rusty Blackbird: the mysterious decline of a common boreal bird

The aptly named Rusty Blackbird is regular fixture in the boreal forest and can often be spotted in wetlands and hanging out by slow moving streams. Until recently, very little was known about this opportunistic water-loving bird but as we learn more about them, we’ve also learned that their populations are in decline. What’s causing this drop in Rusty Blackbird numbers? We’re not entirely sure. Read on to learn how scientists are using modern
technology and recent discoveries to help unravel this mystery. Written by Pam Sinclair in conjunction with Joelle Ingram