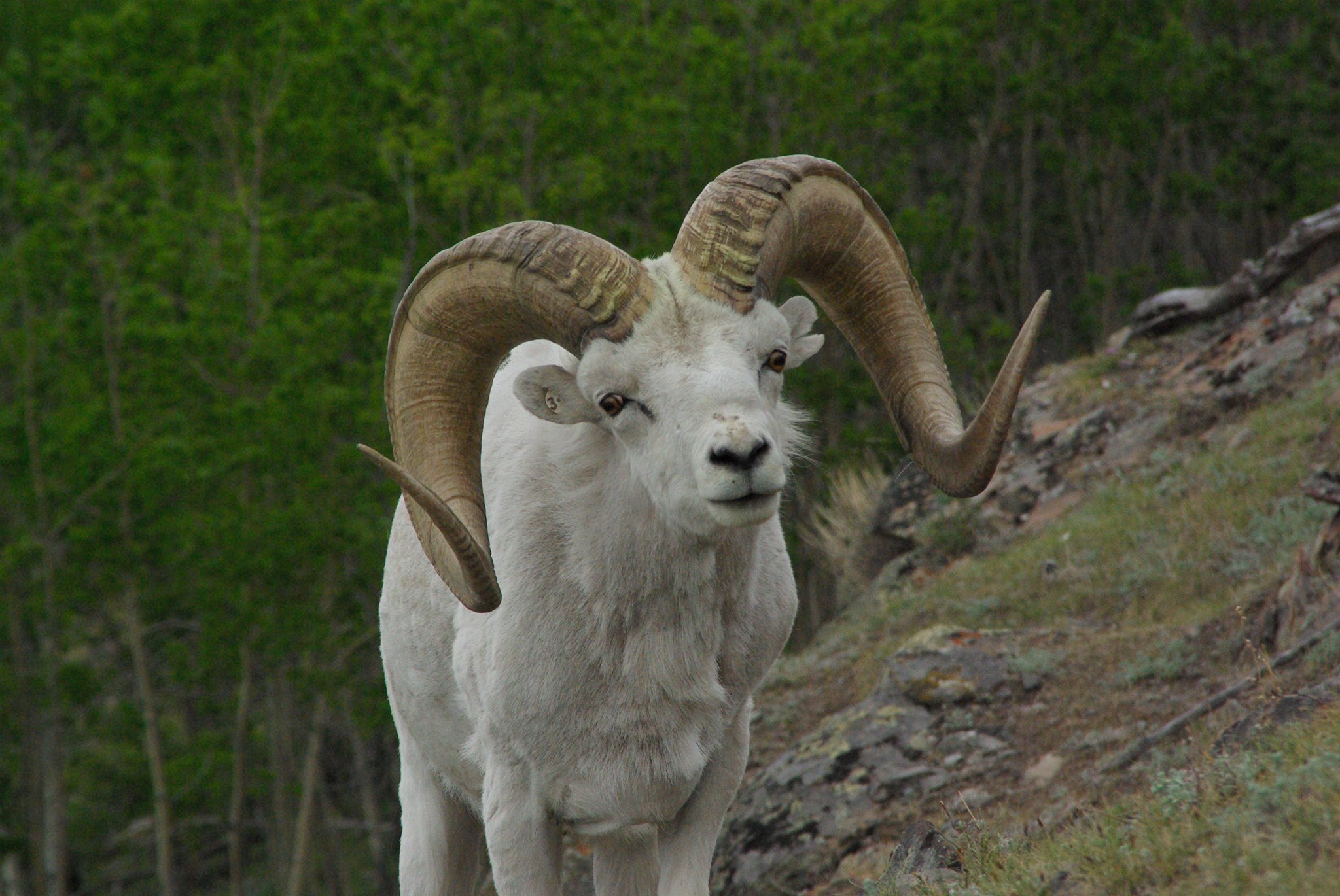 A Thinhorn Sheep’s Case for Eating your Greens

In Kluane National Park and Reserve where I have the privilege of working in the summers, there is a mountain called Sheep Mountain, home to 400 Dall sheep who spend their entire life on the mountain. Those wild sheep rely heavily on 20+ varieties of grasses and sedges making up 46% of their annual diet. They also eat several varieties of willows and sages, especially the pasture sage (artemisia frigida) which grows abundantly all over the mountain. Together sages and willows make up over 30% of their overall diet. In the summer, in addition to fresh grasses, sages and willow buds, the wild sheep feast on fresh alpine flowers, berries, lichens and horsetails, and they get the nutrients they need. In the winter though, their diets is drastically reduced to mostly dry grasses and sages. Because it takes a lot of energy to grow horns and the food is more scarce and less rich in nutrients during the hardest time of the year, sheep’s horns stop growing during the winter, leaving a deep dark grooves in the curl. 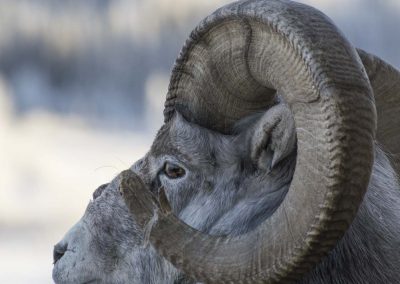 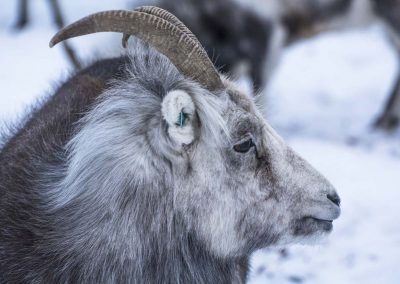 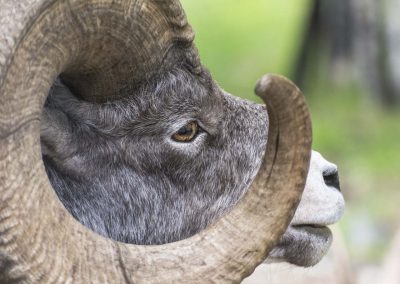 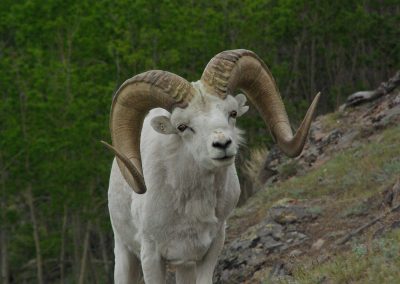 The structure of the horns is also a bit different. The horns on a sheep at the Preserve are a lot smoother than the horns of its wild relative. The wild sheep’s horns are quite bumpy and the color is somewhat darker. This is also due to the difference between their respective diets. The formula given to the sheep at the Preserve have certain minerals that alter the chemical composition of the horns. 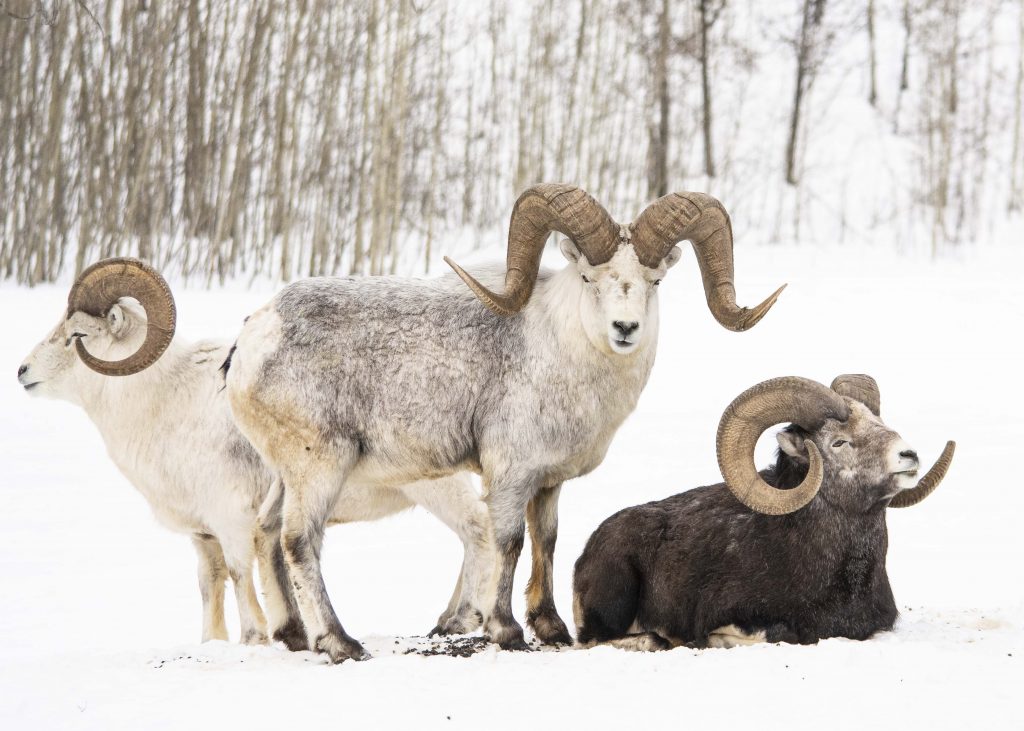 Sheep Mountain has become a popular destination for many outdoors lovers looking for the challenge of a good hike up to the  ridge, both for the amazing scenery and for the hope of getting a closer view at the sheep in their natural habitat. As this hike is attracting more and more visitors, the staff is increasingly doing more education about approaching the sheep. Hikers are asked not to come within 50 meters of the sheep, even when they are lying down, and to travel below them whenever possible. The sheep get very nervous when they perceive a threat and their natural instincts is to run up hill.  A few years back I was observing a lone ewe (female sheep), when she suddenly started bolting upwards on the mountain. Not to far behind and above her, a black shape came running and cut her off. It was a wolf and it was all over in no time. Since dogs can very easily be mistaken for a wolf, it is imperative for dogs to be on leash at all time. When the sheep are laying down they are digesting their food which has to go through 4 different stomach chambers in order to absorb all the nutrients they need. It’s a harsh life up on the mountain and the sheep only have access to fresh nutritious foods for about 4 months out of the year. They need to eat all they can to make it through the next winter and if they are constantly being distracted and interrupted while eating or digesting, they are not getting the nutrients they need to fatten-up for the winter.

Of course here at the Preserve the sheep are well feed and don’t experience many of the stresses of their cousins of the wild, including the risk of starvation or the stress associated with predators looming or human–caused distractions.

In any case, the next time you come to visit us, take a closer look at the horns on one of our beautiful ram and see if you can spot some of those rings. Can you tell how old he is?

This article orgingally appeared in the Preserve Post Quarterly Newsletter in Winter 2015. 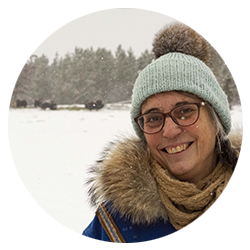 Johanne joined the Wildlife Preserve in the Fall of 2014 as a wildlife Interpreter in the winter. In the summer she is a visitor attendant at Kluane National Park and Reserve. Passionate about the outdoors, she has spent a lot of her time learning about the ways of the land throughout the Yukon in the 40 years + she has lived in the territory. A cabin dweller at heart, she now enjoys sharing her knowledge and experience with visitors from all over the world who come to visit the Wildlife Preserve.